Cain has benefited from his blackness

Cain has benefited from his blackness

With the dramatic accusations yesterday from a fourth woman accuser, Herman Cain’s campaign is in a tailspin from which he is unlikely to recover. So let’s get to it. 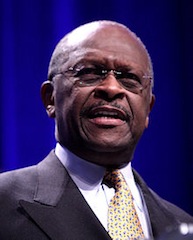 First off, let’s clarify the accusations from Sharon Bialek: The account she gave yesterday was not an account of sexual harassment but rather a charge of sexual assault. That’s more serious — more damning.
But what I really want to talk about is Herman Cain’s ridiculous defense. He and his supporters have blamed the news media for playing up allegations they claim are unfounded. And, more outrageously, he and his supporters have blamed racism. You’ve got to be kidding me!

On Fox News last week, he told rightwing pundit Charles Krauthammer that racism was behind the allegations:

CAIN: I believe the answer is yes, but we do not have any evidence to support it. But because I am unconventional candidate running an unconventional campaign and achieving some unexpected unconventional results in terms of my, the poll, we believe that, yes, there are some people who are Democrats, liberals, who do not want to see me win the nomination. And there could be some people on the right who don’t want to see me because I’m not the, quote/unquote, “establishment candidate.” No evidence.
KRAUTHAMMER: But does race have any part of that? Establishment, maverick, yes. What about race?

CAIN: Relative to the left I believe race is a bigger driving factor. I don’t think it’s a driving factor on the right. This is just based upon our speculation.

Cain’s rightwing supporters, including Rush Limbaugh, have repeated similar nonsense. The simple fact is that Cain is atop the GOP polls, right beside Mitt Romney, for only one reason: Tea partiers and other rightwingers like the idea of throwing their temporary support to a black man who absolves them of racism. There is no other reason that Cain, who knows zip about domestic policy and even less about foreign policy, would claim so much early — if ephemeral — support.

He has been treated gingerly by his GOP rivals, with a sort of gentle condescension, for the same reason — skin color. Other than dismantling his ridiculous 9-9-9 tax plan during a recent debate, Cain’s Republican rivals have paid him little attention. Politico attributes that to his GOP rivals believing that he’s doing a pretty good job of self-destructing. That’s true.

But it’s also true that his rivals know  perfectly well a black man will not get the GOP nomination in 2012 — even if he/she were to be better prepared than Cain. It won’t happen. Besides, the Republican Party has a well-deserved reputation for being an unwelcoming place for black folk. The last thing Romney, et al want to do is play to that reputation.

So Cain was able to skate for as long as he did not because of racial hostility toward him but because of a form of paternalistic affirmative action that favored him.