UPDATE: Newt Gingrich has now set up a Web site designed to combat what he calls errors, false claims and outright lies about his past. In fact, Gingrich’s Web site, not surprisingly, misrepresents the past — cleaning up old misstatements, lying about past indiscretions and generally rewriting history. In this post, I took special notice of Gingrich’s first divorce, since he and his daughter, Jackie Gingrich Cushman, have offered an account that differs in significant details from the account that the first Mrs. Gingrich, Jackie Battley Gingrich, offered at the time.
Gingrich is right to try to clean up a couple of egregious distortions that have been shunted around over the years, including the notion that Mrs. Gingrich was “dying of cancer” at the time of the divorce. In face, she is alive and well.

I’ve known Newt Gingrich for a long time. I remember when he was first elected to Congress from Georgia, and I remember his swift rise as a pugilistic, bombastic back-bencher. He can be fun in conversation if you enjoy intellectual combat, and I do. He can also be pompous, self-serving, overweening and hypocritical. He uses words as weapons, with little regard for whether what he says is actually true. If he has a moral core, it’s hard to pinpoint.
I have known the Newtster long enough that I remember his very unpleasant divorce from his first wife, Jackie. That’s bound to come up since he’s now holding the anti-Romney chair in the parlor game that passes for a GOP presidential primary. And, over the years, he’s done a reasonably good job of playing defense on that subject, persuading many journalists that their initial reports of that divorce were wrong.

Last year, one of his daughters, Jackie Gingrich Cushman, wrote a revisionist history of the infamous hospital visit, in which she even claimed that it was her mother, Jackie, who wanted to end the marriage. Perhaps that’s true. I don’t know since I was not there. 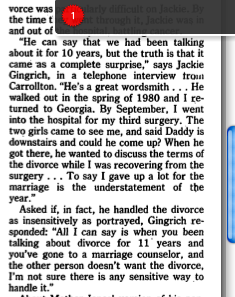 But I do know the younger Jackie’s version of events is quite different from what her mother, Jackie Battley Gingrich, told The Washington Post in 1985. Newt’s first wife told Lois Romano:

“He can say we had been talking about it (a divorce) for tne years, but the truth is that it came as a complete surprise. He’s a great wordsmith. . .He walked out in the spring of 1980 and I retruned to Georgia. By September, I went into the hospital for my third surgery. The two girls came to see me, and said Daddy is downstairs and could he come up? When he got there, he wanted to discuss the terms of the divorce while I was recovering from surgery.”

Why bring that up when there is so much other Gingrich baggage to discuss? I just wanted to set the record straight since that was a crucial piece of my early understanding of the Newster.