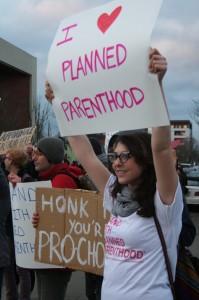 I once trudged many miles in a cold rain to raise thousands of dollars for Susan G. Komen For the Cure’s fight against breast cancer. I won’t do it again.
I once stood in the blazing sun to cheer men, women and young children walking in support of breast cancer survivors and in memory of those claimed by the disease — fundraising events sponsored by the Susan G. Komen foundation. I won’t support them with my cheers or my checks again.
For years, I have purchased tee shirts, flip-flops, shopping bags and closets-full of other tchotchke emblazoned with a pink ribbon, all by way of donating to Susan G. Komen For the Cure. No more.
I join legions of men and women angry and disappointed that the foundation — the world’s best-known advocacy group for breast cancer research — has caved in to a rightwing smear campaign against Planned Parenthood, which provides basic health care, including mammograms, to millions of women around the country. After two decades in partnership, Komen has said it will no longer give Planned Parenthood grants to pay for mammograms. So I will no longer support Komen.
I’m very surprised that Nancy Brinker — who founded the organization after her sister, Susan, died of breast cancer — has turned her back on Planned Parenthood, which has stood in the gap for decades, providing health care for women who can’t get it otherwise. A shrewd marketer and skilled fundraiser with a lot of political savvy, Brinker knows perfectly well that Planned Parenthood has long been a target of anti-abortion extremists. Why cave in to them?
Planned Parenthood is usually caricatured as an abortion provider by its critics, but it offers a range of health services for women are uninsured or underinsured — a problem to which the rabid right has no reasonable response. It does provide abortions, but they account for less than five percent of its services. And none of Komen’s funds were used for abortions.
Brinker and her board of directors contend that the foundation has instituted a new rule that denies funding to any group under investigation by “federal, state or local” authorities. They point to a so-called investigation launched by anti-choice Congressman Cliff Stearns (R-Fl), who claims to suspect that Planned Parenthood is using taxpayer funds to provide abortions. (In an MSNBC interview on Thursday, Brinker also said that Planned Parenthood did not meet new standards for grant recipients, though she was unclear about precisely what the standards are.)
That would be a violation of federal law, and Stearns has produced not one shred of evidence to back it up the charge.
The investigation is a witch hunt right out of Joseph McCarthy’s playbook. As McCarthy did, Stearns is simply using an “investigation” as a ploy to smear an organization and spook its supporters. If that is to be the basis for funding decisions, McCarthyites in Congress will be encouraged to launch “investigations” against organizations they oppose.
Stearns aside, many Planned Parenthood supporters, including me, suspect that a Georgia politician played a key role in persuading Komen to cut ties with a longtime partner. In 2010, Karen Handel, Georgia’s former secretary of state, lost a bid to become governor despite an endorsement from Sarah Palin. Komen hired her last April as senior vice president for public policy.
While Komen has long prided itself on support from liberals, moderates and conservatives alike, Handel— who, like Palin, is bluntly anti-choice — was a curious hire. During the campaign for governor, she wrote, “Since I am pro-life, I do not support the mission of Planned Parenthood.” Indeed, she went so far as to pledge to eliminate state grants to Planned Parenthood for breast and cervical cancer screening and for prenatal care.
Though Brinker denied in the interview that Handel played any part in the split with Planned Parenthood, Handel will benefit. If her Facebook page is any indication, she is quietly using this high-profile controversy to endear herself to hardcore anti-abortionists, who weren’t sure she was hardcore enough during her campaign for governor. Watch for her to run for office again.
So Brinker has allowed her charity, once highly regarded, to be misused by an ambitious and manipulative politician who couldn’t care less about poor women getting mammograms. That’s too bad. And it’s a mission I cannot support.