GOP is too nutty for Olympia Snowe

GOP is too nutty for Olympia Snowe 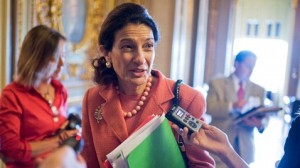 Who can blame Olympia Snowe for giving up on the U.S. Senate?

It has become a dysfunctional institution, infected by the same virulent partisanship that long ago claimed the House, hamstrung by rules that elevate petty politics over policy and stripped of the reasoned debate and thoughtful compromise that once characterized its work. Because filibusters now threaten most bills, it takes 60 votes, not a simple majority, to pass even innocuous legislation.

It is fashionable among reporters and ostensibly non-partisan observers to parcel out blame for this depressing state of affairs equally among Democrats and Republicans, but that’s simply not accurate. Most of the blame for the current state of affairs in the Senate — as you’ve figured out if you’ve been watching the Republican primary campaign — belongs with a GOP that has becoming increasingly obstreperous even as it becomes increasingly unmoored from reality.

The Republican Party has been taken over by a rightwing faction that champions ideological purity over compromise and bellicose rhetoric over reasoned debate. That left Snowe, a GOP moderate who understood that governance requires give and take, increasingly isolated within her own party.

A longtime supporter of women’s reproductive health care, Snowe is now the very rare Republican lawmaker who supports abortion rights, for example. That stance makes her an easy target for ultra-conservatives since social issues have suddenly resurfaced as central to party politics.

The New York Times reports that tea party activists jeered at the mention of the senator’s name during Republican  caucuses last month. It’s no wonder that she announced last week that she will not seek re-election. (Rush Limbaugh, don of the bellicose faction, described her departure as “no big deal.”)

If you are still clinging to the view that the two major parties are equally to blame for the current state of politics, consider this: Harry Reid, Senate Majority Leader, is a pro-life Mormon. In other words, the Dems selected as their Senate leader a man who disagrees with the party’s official policy on reproductive rights. Republicans would sooner lose every seat in the Senate than hand their leadership post to a pro-choicer.

Political scientists confirm that the Republican Party has moved much further to the right than the Democratic Party has moved to the left. Yale professor Jacob Hacker, author of the 2006 book “Off Center,” said that since 1975, “Senate Republicans moved roughly twice as far to the right as Senate Democrats moved to the left,” according to New Yorker writer Ryan Lizza, who quoted Hacker in a January article.

Lizza also quoted a soon-to-be-published book, “It’s Even Worse than It Looks,” by well-known Washington political observers Thomas Mann, of the centrist Brookings Institution, and Norman Ornstein, of the conservative American Enterprise Institute. According to Lizza, they write: “One of our two major parties, the Republicans, has become an insurgent outlier—ideologically extreme, contemptuous of the inherited social and economic policy regime, scornful of compromise, unpersuaded by conventional understanding of facts, evidence and science, and dismissive of the legitimacy of its political opposition.”

That pretty much sums it up. Listening to his party’s presidential candidates, even Jeb Bush, scion of the reigning GOP dynasty, recoils from the extremist rhetoric.

After a speech in Dallas last month, Bush was asked about the Republican debates. According to Fox News, he said:

“I used to be a conservative, and I watch these debates and I’m wondering, I don’t think I’ve changed, but it’s a little troubling sometimes when people are appealing to people’s fears and emotion rather than trying to get them to look over the horizon for a broader perspective.”

Snowe would echo much of that.