Gay marriage should be legal, regardless of what churches think

Gay marriage should be legal, regardless of what churches think 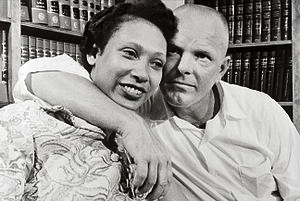 In the contentious debate surrounding gay marriage, a couple of conservative talking points stand out for their irrationality. One of those is the notion that allowing same-sex couples to marry would represent a gross usurpation of religious freedom.

Like the equally ridiculous idea that homosexual marriage would somehow undermine heterosexual marriage, the notion of infringing on religious liberties is a thicket of misunderstandings, historical distortions and outright lies. Now that President Obama has endorsed the principle of marriage as a civil right that should be available to all citizens, I fully expect that thicket to explode, spewing a cloud of nonsense over an argument already laden with foolishness.

Take the insistence by some conservative Christians that, if same-sex marriage were broadly legal, the federal government would be in a position to force Southern Baptist ministers and Catholic priests to carry out such marriages. Campaigning against gay marriage in California in 2008, Tony Perkins, head of the ultra-conservative Family Research Council, declared that if same-sex marriages were legalized, “Pastors and churches will be silenced from speaking publicly against homosexuality.”

Really, that’s too idiotic to merit a response — but I’m going there anyway. Has the federal government ever ordered the Vatican to marry a divorced couple whom it deemed unworthy of the sacrament? Has the government ever tried to force a Haredi rabbi to sanction a marriage between a member of his community and a non-Jew? Of course not. Such marriages would be readily and legally performed in a courthouse, but the First Amendment protects the right of religious institutions to perform only those rituals which they choose.

By the way, that same protection runs in the other direction, too. While conservative Christians — and, unfortunately, the news media, as well — tend to define “Christianity” as solely the province of conservative believers, there are many liberal ministers who have happily performed same-sex marriages in the handful of states that allow them.

Of course, that’s among the reasons the Founding Fathers were careful to separate church and state. The experience of Western Europe — where disputes among believing Christians had led to burnings, beheadings and bloody wars — was fresh in their minds. In their new charter, protecting religious liberty was paramount. So even when same-sex marriage is legal in all 50 states, churches, mosques and synagogues will remain free to discriminate as they like.

But here’s where believers and non-believers are likely to get confused: marriage is not only a religious sacrament, but it is also a civil rite (as well as a civil right). For reasons of non-belief or convenience or cost, couples get married at courthouses around the country every day. If the government bestows that opportunity on heterosexual citizens, it can hardly deny it to homosexual citizens.

Along with an official imprimatur, the federal government and the states bestow a wide array of perquisites and responsibilities on spouses, from survivor’s benefits to hospital visiting privileges. Gay citizens deserve those, too.

It has taken centuries for the United States to come this far in extending equal rights to all its citizens. It wasn’t until 1967, in Loving v Virginia, that the Supreme Court struck down state laws banning interracial marriage. The case was filed by an interracial couple — Richard Loving, who was white, and his wife, Mildred, who was black. Married in the District of Columbia in 1958, they returned home to Virginia to face shameless harassment and arrest.

On the 40th anniversary of the Supreme Court’s ruling, Mrs. Loving, then long widowed, issued a rare public statement. She said:

I support the freedom to marry for all. That’s what Loving, and loving, are all about.