Bloomberg is right about climate change

Bloomberg is right about climate change 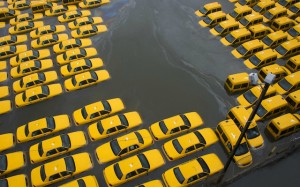 A few years ago, Washington, D.C. was subjected to a freakish winter — a series of nightmarish snowstorms that crippled a city ill-equipped to handle them. The back-to-back blizzards  prompted derisive howls from the flat-earthers in Congress who insist that human-caused climate change is a hoax. The grandchildren of Sen. James Inhofe — Oklahoma Republican and flat-earther-in-chief — built an igloo from mounds of D.C.’s snow and proclaimed it Al Gore’s new home.

After the ravages of Superstorm Sandy, is Inhofe still denying that human activity has altered the climate? Probably. He has invested too much in his ignorance to change his mind.

But the storm’s horrifyingly destructive powers just might have gotten the attention of more thoughtful Americans, those who are inclined to respect scientific data and to pay attention to clear indications of a “new normal” in the weather. Extreme weather events that were once believed to be once-in-a-century catastrophes are cropping up with peculiar frequency. That’s no hoax.

Let me be clear: I know of no conscientious scientist who states with certainty that a warming planet caused the freakish storm, which combined a hurricane with a  “nor’easter” to produce howling winds, surging seas and early blizzards. But many have said that a warming planet exacerbated Sandy’s destructive impulses.

“Storm surge is the big story here,” University of Georgia meteorologist Marshall Shepherd told me, noting that much of the destruction was created by seawater that was whipped up by high winds and surged inland. “We know sea level rise has occurred, so storm surge is exacerbated. That’s one area where we can put the DNA of climate change on Sandy.”

For years now, climate scientists have produced reports warning coastal cities of the dangers they face because of rising sea levels produced by a warming planet. Those reports have been ignored or, worse, dismissed by politicians and a public who didn’t want to believe that could be true.

Climatologists have also pointed out that extreme weather events — calamitous hurricanes, severe droughts, devastating floods — are occurring more frequently. As New York Gov. Andrew Cuomo noted last week, “There have been a series of extreme weather events. That is not a political statement; that is a factual statement. Anyone who says there is not a change in weather patterns is denying reality.”

Shepherd, president-elect of the American Meteorological Society, explains the effect of a warming planet on weather patterns by comparing it to steroid use in baseball. “We know that during the steroid era, there were more home runs and longer home runs, even though I couldn’t have told you that any single home run was caused by a player using steroids. Climate change is the steroid of storms,” he said.

As his city attempted to restore normalcy last week, New York Mayor Michael Bloomberg threw a belated and unexpected endorsement to President Obama, believing him more likely to change the status quo on the climate. But the truth is that monied interests, fearing increased government regulation of fossil fuels, have made global warming not only off-limits for Republicans but also politically risky for Democrats. Obama has rarely mentioned it during the campaign.

I had hoped that last summer’s awful droughts would have forced the public — and recalcitrant politicians — to come to terms with the consequences of climate change. With nearly two-thirds of the continental United States experiencing unusually dry weather, crops withered and died. Prices went up. But politicians and most farmers refused to acknowledge the link between dying fields and a warming globe.

They were no more interested in the scientific evidence than Inhofe, who didn’t understand that a warmer planet will likely bring on more snow, not less. Warmer air holds more humidity, producing more snowfall.

Maybe Superstorm Sandy will force us to finally face the plain truth: We cannot keep abusing the environment and expect  there will be no price to pay. And it will be more costly than the billions needed to clean up after just one storm.