Chuck Hagel was right about Iraq, he’s the right man for the Pentagon

Chuck Hagel was right about Iraq, he’s the right man for the Pentagon 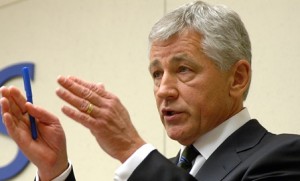 The right man for the job

Chuck Hagel has committed unpardonable sins. He has violated the GOP commandment — popularized by Ronald Reagan — against criticizing his fellow partisans. Worse yet, in the eyes of those partisans, he has castigated the warmongering imperialists who dragged the nation into a disastrous invasion of Iraq.

Recipient of two Purple Hearts as an enlisted man in Vietnam, Hagel came back from that war a staunch defender of U.S. intervention in southeast Asia, according to an insightful 2007 profile in The New Republic.  And during his years as a Republican senator from Nebraska, he accumulated a conservative voting record. But, in writer John Judis’ account, Hagel’s long-suppressed doubts about Vietnam led him to become a vociferous critic of the invasion of Iraq.

That’s why so many Republicans are vehemently denouncing President Obama’s decision to name Hagel to head the Pentagon. No matter that they have come up with phony charges about his hostility toward Israel or his naivety toward Iran, the GOP’s neoconservatives are really worried that Hagel’s nomination as Secretary of Defense will highlight their recklessness and force them to publicly atone.

It’s about time. In recent years, most reasonable foreign policy experts and regular citizens have concluded that the decision to oust Saddam Hussein was a catastrophe. It cost at least a trillion dollars — ushering in the huge deficits that conservatives now claim to loathe — and thousands of American lives, as well as the lives of tens of thousands of Iraqis.

And though you seldom hear this mentioned, the U.S. invasion of Iraq also strengthened Iran. Think back to that well-publicized photograph of Donald Rumsfeld shaking hands with Hussein in 1983. Back then, Hussein had nominal American support because his Sunni-dominated regime provided a useful counterweight to Iran, which is dominated by Shiites. Now, the Shiite-majority controls Iraq, and its members have kissed and made up with their Iranian co-religionists.

But the neoconservatives who brought us this misadventure have suffered no consequences. Heck, they’ve shamelessly moved on to clamoring for war with Iran. Among others, William Kristol, Dan Senor and the Kagans — Yale professor Donald and his sons, Frederick and Robert —remain respected members of the conservative foreign policy elite. That doesn’t even count such long-serving politicians as Sen. John McCain, who continues to insist that the so-called surge “won” Iraq.

How is it that the men responsible for such for such a misguided policy could escape with their reputations intact? Why haven’t they paid any price for being so wrong? Why haven’t they been forced to concede what they cost this country?

The escalation of the war in Vietnam cost Lyndon Johnson a second term — along with his reputation. He is mostly remembered not as the courageous president who used his bully pulpit to usher in strong civil rights laws but rather as the feckless commander-in-chief who sent so many young Americans to a needless death.

History may yet judge George W. Bush in much the same way; certainly, the Republican Party wants to pretend his tenure never happened. But few Republicans have ever publicly admitted the Iraq was was disastrous. (Among those few are U.S. Rep. Dana Rohrabacher, a rightwinger from California, who told an audience in 2010 that “the decision to go in, in retrospect, almost all of us think that was a horrible mistake.” He was speaking of Congressional Republicans.)

I have never forgotten those early years of the war, when critics (I was one) were blasted as traitors and armchair hawks insisted that the force of the U.S. military would forge Jeffersonian democracy in Iraq. I have never forgotten the affluent conservatives who cheered on the effort to oust Saddam while insisting that their sons and daughters would never serve. I still remember that most of the instigators of that war — including Dick Cheney — had never served in uniform themselves.

Hagel remembers that, too, according to Judis. He began to see Iraq as another misbegotten effort that would chew up young men and women from working-class homes, while the comfortable cheered from the sidelines and stuck yellow ribbon bumper-stickers on their Mercedes-Benzes.

That makes him just the right man for paring back an overgrown U.S. military machine.