Iraq’s warmongers paid no price for their deceit

Iraq’s warmongers paid no price for their deceit 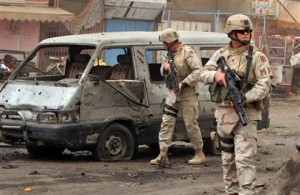 Ten years ago, on March 20, 2003, the administration of George W. Bush launched its disastrous invasion of Iraq. It’s a war most Americans — including many Republicans who enthusiastically supported it — are working assiduously to forget.

Not so fast. An examination of the lies, the hypocrisy and the power-mongering that led us into that act of grand folly may help us to avoid similar impulses in the coming decades. Besides, there are lasting consequences that cannot be shoved into history’s dustbin.

Yes, Saddam Hussein is dead. So are an estimated 100,000 Iraqis and more than 4400 Americans. Countless other Americans are forever maimed, some of them suffering mental traumas from which they will never fully recover.

That’s the human toll. It doesn’t include the billions of dollars that were wasted. While the official calculations of the cost to the treasury are in the $800 billion range, the Nobel laureate Joseph Stiglitz has put the cost to the U.S. economy at three trillion. That’s why it’s quite laughable now to listen to the Fox News crew blast President Obama over the budget deficit. They all cheered for Bush’s dumb war, which he prosecuted while cutting taxes.

But the most disastrous longterm consequence of the war may be its effect on Iran. The United States gave Saddam nominal support for years because he served as a check on Iran, his bitter enemy. Now Shi’a run Iraq, as they do Iran, and Tehran has great influence in Baghdad.

So how is it that so many cheered the invasion? Why did so few voice any dissent? Why was it that those who did argue against the war were vilified as traitors?

I vividly recall the months leading to the war because I was among those who insisted at the outset that the drive to oust Saddam was foolish. (At first, I assumed Bush was merely posturing. Even he, I thought, wouldn’t do something that stupid.) For my trouble, I was denounced as a fifth columnist, an appeaser, a liberal bed-wetter, etc.

Among those attacking my anti-invasion stance were comfortable, affluent professionals whose sons and daughters would never have considered volunteering for military service. I was dumb-founded by the nonchalance — and hypocrisy — with which they endorsed a war that would be fought by young men and women largely from the working classes.

I was also deeply disappointed — taken aback, actually — by the complicity of the major news media, whose supposedly intrepid journalists, instead of ferreting out official dishonesty, caved before it. The nation’s best newspapers ran numerous front-page stories trumpeting the Bush adminstration’s lies about Saddam, his alleged WMDs and his supposed collusion with Osama bin Laden. There were no similarly-placed stories about the Project for the New American Century, the group of neo-cons who were pushing for Saddam’s ouster years before 9/11.

Andrew Bacevich, a well-respected foreign policy scholar and early opponent of the war, lists a misplaced faith in the U.S. military as among several reasons for the lack of critical questioning from the media or political leaders.

“It was taken for granted that we would win and we would win easily,” Bacevich, a Boston University professor and retired military officer, told me. “For anyone to question the effectiveness of the U.S. military in those days was tantamount to failing to support the troops, and no politician or person who cared about their public reputation dared do anything that would suggest failure to support the troops.”

Bacevich also points out that, unlike the war in Vietnam, which was also fueled by official dishonesty, few public figures who led the nation into Iraq have paid any price. Not only was Lyndon Johnson’s career cut short and legacy diminished, but his leading foreign policy strategists were also forced into public contrition. Not so with Bush’s minions. Vice President Darth, ah, Dick Cheney remains adamant that Saddam was in league with anti-U.S. terrorists, even though all credible intelligence officials have said otherwise. John McCain, for his part, bludgeoned Chuck Hagel recently because Hagel came to oppose the war.

It’s much too early to forget the folly of Iraq. Too few of us have learned any lessons from it.