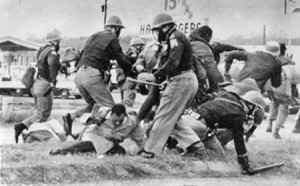 John Lewis is beaten on the Edmund Pettus Bridge

If you want to stare into the ugly face of racial resentment, take a good look at Supreme Court Justice Antonin Scalia. His frank, if stunningly injudicious, remarks about a key portion of the Voting Rights Act laid bare the bitterness that so many hyper-conservatives still harbor toward black progress.

Earlier this week, during oral arguments about a challenge to the law — widely considered the crowning achievement of the civil rights movement — Scalia dismissed a critical part of the law as a “perpetuation of racial entitlement.” Given that the VRA was passed to ensure that black Americans had the right to vote — after white segregationists had showed they were willing to beat, jail and kill activists to block the black ballot — it was a chilling remark.

I’m so glad Scalia, who has long since given up the charade of a circumspect judicial temperament, said exactly what was on his mind. It saves me the trouble of having to persuade you that many critics of the VRA are mossbacks who still resent the political transformation unleashed by the power of the black vote.

Other skeptics on the high court managed more subtle criticisms, largely built around the notion that much has changed in the decades since a young John Lewis was beaten bloody on the Edmund Pettis Bridge 48 years ago next week. It’s a very seductive argument.

I know because I was very nearly seduced by it myself. In 2005, civil rights activists were gearing up to lobby Congress to once again renew the VRA, set to expire in 2006. As I considered their arguments, I looked around at a political landscape that Martin Luther King Jr. would not have recognized.

With black men and women serving in major political posts (appointed and elected), including as U.S. Secretary of State, I was about to concede to the forces who argued that the Voting Rights Act was no longer necessary. And I was prepared to disagree with the esteemed Lewis — who has now been a distinguished member of Congress for more than a quarter-century — on the point.

But the Georgia General Assembly dragged me back to the reality of the modern-day politics of racial exclusion. In 2005, its Republican members pushed through an odious piece of legislation requiring state-sanctioned photo IDs, such as a driver’s license, for voting. It became one of the first states to do so.

Then, as now, there was no compelling argument for the requirement. Despite conservative claims about voter fraud, in-person fraud at the ballot box is virtually non-existent. As many voting rights activists pointed out, the law was aimed squarely at poorer voters who tend to support Democrats, especially black and brown voters. Georgia’s voter ID law, like similar ones around the country, was designed to suppress the minority vote. So instead of giving up on the Voting Rights Act, I enthusiastically supported its renewal in 2006.

Since then, voter suppression efforts have gone into hyper-drive.

It’s true that Sheriff Jim Clark no longer waits on the other side of the Edmund Pettus Bridge to beat protestors to a bloody pulp. But Republicans responded to President Obama’s breakthrough first victory — and the realization that it was powered by voters of color — by becoming more imaginative in their tactics to discourage, inconvenience and disenfranchise those voters. Not only did they pass strict ID requirements, but they also moved to limit early voting. It’s no accident that most of the marathon waits were endured at polling places with predominantly black or Latino voters.

The Voting Rights Act can limit the damage of those voter suppression efforts, at least in those areas of the country where Section 5 has jurisdiction. In the past three years, for example, the Justice Department used its authority to rebuff harsh voter ID laws in Texas and South Carolina and to temper restrictions on early voting in Florida.

Those examples show that the Voting Rights Act, for which some brave souls gave their lives, is still necessary. Unfortunately, Scalia and his fellow partisans see the law — which simply ensures that voters of color can exercise their right to vote without harassment — as a giveaway to appease those uppity blacks.