The redemption of Genarlow Wilson

The redemption of Genarlow Wilson 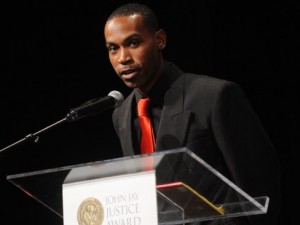 This is a story of redemption, a tale of obstacles overcome, statistics defied, clichés silenced. Last week , Genarlow Wilson, once judged an irredeemable sex offender, graduated from Atlanta’s Morehouse College, the small all-men’s institution that is the alma mater of Martin Luther King Jr.
Convicted of the statutory rape of a 15-year-old girl during a raucous, alcohol-and-marijuana-fueled New Year’s Eve party in metro Atlanta in 2003, Wilson served more than two years of a 10-year prison sentence. Though the sex was consensual and Wilson was just 17 at the time, the law — carelessly written — judged him an adult taking advantage of a child.
Perhaps more than most, Wilson appreciated the advice in President Barack Obama’s commencement address, a familiar recitation of exhortations and down-home wisdom. He had lived some of the experiences of which Obama spoke, been down some of the paths the president described:
“We know that many young men in our community continue to make bad choices. And I have to say, growing up, I made quite a few myself. Sometimes I wrote off my own failings as just another example of the world trying to keep a black man down. I had a tendency sometimes to make excuses for me not doing the right thing.”
Wilson acknowledges the bad choices he made that fateful night. He has crisscrossed the country speaking to teenagers, warning them against alcohol, drugs and sexual promiscuity. As he told The Atlanta Journal-Constitution, “I look back, shake my head and say, ‘I can’t believe I did that. That is not the person who I am now.’ ”
But he didn’t view himself a sexual predator; he wouldn’t accept a sentence that dictated that he belonged on the sexual offender registry for life. He fought the judgment of a system that saw him as just another young black criminal with a future defined by his rap sheet. He reclaimed his life and joined a proud class that sat in pouring rain to hear the nation’s first black president praise them, encourage them, challenge them:
“Well, we’ve got no time for excuses. Not because the bitter legacy of slavery and segregation have vanished entirely; they have not. Not because racism and discrimination no longer exist; we know those are still out there. It’s just that in today’s hyperconnected, hypercompetitive world . . .Nobody cares how tough your upbringing was. Nobody cares if you suffered some discrimination.”
When the criminal justice system finally came to its senses and released Wilson in 2007, he enrolled at Morehouse. The international publicity surrounding his case had brought him a network of supporters and mentors, including a local politician who gave him a job. Radio personality Tom Joyner’s foundation gave him a scholarship that financed his studies. Morehouse officials enveloped him in a bubble of attention and advice.
And Wilson grabbed on to the ropes he was thrown and pulled himself up. “I just felt like coming out of that situation, getting a second chance, I knew there wouldn’t be any more chances. So failure couldn’t be an option. I had to do three hundred percent,” he told me.
“There are some things, as black men, we can only do for ourselves. There are some things, as Morehouse Men, that you are obliged to do for those left behind. As Morehouse Men, you now wield something even more powerful than the diploma you’re about to collect — and that’s the power of your example.”
Ironically, Wilson now works as a detention technician in a metro Atlanta sheriff’s department, monitoring the security of inmates. “It was an opportunity,” he said. A sociology major, he sees it as one step up the career ladder. But it may be more — a chance for him to share his story with other young men who are flailing, an opening to be a role model.
Among the black chattering classes, there were some who took umbrage at Obama’s remarks, seeing condescension in his “no excuses” mantra. Not Wilson, who called the president’s address “inspiring and motivating. It’s something I’m going to remember for the rest of my life.”
After all, he just may be the poster child for that speech.