“It may be true that the law cannot make a man love me, but it can keep him from lynching me, and I think that is pretty important.” — Martin Luther King Jr., 1963 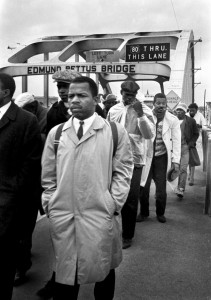 In the half century or so since John Lewis had his head bashed in on Selma’s Edmund Pettus Bridge, the Deep South has undergone a stunning social, cultural and political transformation. Just ask Paula Deen.

Her black patrons, if she has any left, are free to go inside her Savannah restaurant, request a table and pay for the privilege of her heart attack specials. Though her recent ramblings expose racial attitudes infused with, at best, a certain clueless condescension, she came of age as Southern whites were forced to adjust to the demands of a people sick of subjugation.

She might treat her black workers with something less than fairness and respect, but it wouldn’t occur to her to segregate her dining room. The times have changed too much to allow such blatant discrimination to creep back in to common practice.

Still, the conversion of hearts and minds is only part of the New South’s story. As much as traditionalists may be loath to admit it, the transformation owes much to the laws that grew out of the civil rights movement, as well as a federal judiciary that was willing to enforce them.

Until now.  Last week, the radical rightwing of the U.S. Supreme Court drove a truck bomb into one of the pillars of the civil rights revolution, the Voting Rights Act. Writing for the majority, Chief Justice John Roberts declared that its strict enforcement standards were antiquated, a throwback to a time when Jim Crow roamed the land.

He didn’t quite declare racism dead, but he may as well have done so. He seems to think that the law has succeeded so brilliantly that its tough oversight of certain states, mostly in the South, is no longer necessary. But it is. Unlike social customs such as segregated dining rooms, entrenched political power is much more difficult to reform. That’s because there’s so much more at stake. Requiring the oppressor to share power with the oppressed is a tall order, demanding generations of vigilance accompanied by sanctions for the recalcitrant.

It’s true that a cursory glance suggests a Southern political establishment transformed by the ballots of black citizens. The clumsy old barriers to the voting booth have been dismantled, and black men and women have assumed the levers of power in local and federal offices. (Fewer have won statewide seats.)

Still, it doesn’t take much research to see the deep-seated racial antagonism that lingers among some white Southern voters. When Barack Obama ran for the presidency in 2008, he received less support among white voters in three Deep South states —Louisiana, Mississippi and Alabama — than John Kerry had four years earlier. (Louisiana, Mississippi and Alabama, not coincidentally, are among the states covered by “pre-clearance” rules eviscerated by last week’s ruling.)

Kerry and Obama are both Democrats who hail from the party’s center-left wing. Their ideologies are indistinguishable. There is, however, one clear difference: skin color.

Old prejudices are also alive and well in the backrooms of many Southern powerbrokers. In her powerful dissent, Justice Ruth Bader Ginsburg cited the example of a conservation caught on tape during an FBI investigation of political corruption in Alabama. A white state legislator was caught referring to black Alabamians as “aborigines” while plotting to stymie a gambling-related referendum because it might draw more black voters to the polls. That wasn’t in 1960 or 1970. That was in 2010.

The Old Dixie stands no more, but there are still whites who mourn its passing and would resurrect many of its limits on black aspirations. Days after the Supreme Court’s verdict, six of the nine states covered by the old “pre-clearance” rules announced plans to move forward with voter ID laws, the 21st-century version of the poll tax.

When Barry Goldwater voted against the Civil Rights Act in 1964, he reportedly justified his defiance with the claim that “you can’t legislate morality.” Maybe not, Dr. Martin Luther King Jr. answered, but “behavior can be regulated.” Unfortunately, the nation’s highest court has now sided with those who do not want their behavior toward black voters bound by justice and equality.