White panic over a browning America

White panic over a browning America 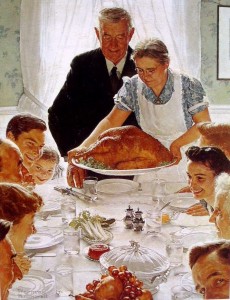 Norman Rockwell is dead. So is his America.If you find that declaration sad, or possibly slanderous, you probably have fond memories of “the way we were” during a supposedly kinder and gentler time before the civil rights movement, women’s lib and cell phones. If you don’t shed tears over that America, you may have grown up as I did — oppressed by the strictures of a social and political system that didn’t show much respect to those who were not white male Christians.
Either way, the overwhelmingly white nation that Rockwell depicted in his sentimental paintings is gone. (I intend no disrespect to Rockwell, whose portrait of 6-year-old Ruby Bridges integrating a New Orleans school stands out in civil rights iconography.) Just last week, new data from the U.S. Census Bureau confirmed a trend long in evidence: The nation continues, inexorably, to grow darker.
For the year ending July 1, 2012, deaths among non-Hispanic whites exceeded births, the Census Bureau reported. The majority of births in this country are now to blacks, Asians and Latinas.
That development helps to explain the discomfort among older conservative voters with immigration, which has been the driver of the nation’s increasing diversity. They see the country in which they grew up, in which they held the political, social and economic power, slipping away, becoming a place with which they are unfamiliar. Their anxiety boils down to a misplaced fear that they will be strangers in their own land.
Their misapprehensions are stoked and amplified by the rightwing media axis, which has spent years defining undocumented workers as barbarians at the gate and all people of color as suspect. Even as support grows in mainstream America for legalizing undocumented immigrants, the pitbulls of the right continue to denounce any attempt at comprehensive immigration reform as an unjustified “amnesty” to lawbreakers.
Rich Lowry — editor of National Review, the magazine founded by William Buckley — says so. So does former South Carolina Sen. Jim DeMint, now head of the conservative Heritage Foundation.
Rush Limbaugh, as usual, doesn’t attempt subtlety as he argues that conservative voters would lose all political clout if undocumented immigrants gain citizenship: “There are legitimate fears that …Republicans/conservatives are gonna end up .. outnumbered.”
If Limbaugh conflates conservatives with his listeners, he’s right. But they are dwindling, anyway. The Limbaugh audience — like the GOP primary voter — skews older. Looking toward voting patterns ten to 20 years from now, Republican strategists have fretted over the party’s failure to appeal to younger voters.
One of the ways in which the GOP alienates younger Americans is with its harsh rhetoric and unwelcoming policies toward those who crossed the border illegally. According to a 2009 Washington Post/ABC News poll, 73 percent of Americans ages 18-29 support giving those immigrants a path toward legal status.
Younger Americans have grown up in a more diverse nation, so they are far less likely to see those with darker skin and different accents as a threat. But there are good reasons for older white Americans to welcome immigrants, too — whether or not they entered the country with legal documents.
Without them, the United States would be doomed to the kind of demographic “bust” that countries from Japan to Russia are experiencing, with birthrates so low that the population is not reproducing itself. That has all sorts of dire economic consequences.
For one thing, there aren’t enough younger workers to support all the retirees. Japan’s long-running economic malaise has several causes, but its aging population — exacerbated by its hostility to immigrants — is surely one of them.
Whatever the long-term problems with our Social Security and Medicare programs, they’d be far worse without the Latinos, Asians and Africans who have revitalized rundown neighborhoods, invigorated popular culture and shared in the American Dream. As Brookings Institution demographer William Frey told The New York Times, the new Census figures make “more vivid than ever the fact that we will be reliant on younger minorities and immigrants for our future demographic and economic growth.”
Their vitality ought to be welcomed.