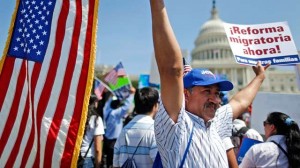 For a bright, shining moment, it seemed that the abiding spirit among conservative Protestants was one of hospitality and compassion toward the “stranger.” But that turned out to be an illusion. Despite signs that Southern Baptists and other evangelicals might finally embrace the unauthorized immigrants living among us, many conservative church-goers remain ambivalent or outright hostile to any plans to provide a path toward citizenship.

That helps explain why House Speaker John Boehner and his rebellious caucus have denounced a comprehensive immigration reform proposal recently passed by the U.S. Senate. House Republicans believe their constituents, who include most conservative evangelicals, find comprehensive immigration reform a bit of heresy — amnesty granted to lawbreakers and grifters. There is research to back that conclusion: 55 percent of white evangelical Protestants view immigrants as a “burden,” while 58 percent believe they “threaten” traditional American values, according to the Pew Research Center.

Optimists had concentrated on a less antagonistic — and slightly contradictory — finding from that Pew survey, conducted in March: An overwhelming majority of white evangelicals, 62 percent, said that undocumented workers should be allowed to stay in the country legally. While other religious groups showed greater support, even evangelicals appeared solidly behind the Biblical imperative to treat the “stranger” with charity and acceptance.

And there were other signs that conservative evangelicals might have experienced a road-to-Damascus epiphany, a realization that their belligerence toward undocumented newcomers borders on persecution. Two years ago, the Southern Baptist Convention — the largest and most influential denomination of conservative Protestants — called for “a just and compassionate path to legal status.”

Sure, the language was vague enough to give skeptics room for cover. Still, it denounced bigotry and harassment of the undocumented, which seemed a big step down the path of righteousness for a denomination that only got around to apologizing for endorsing slavery in 1995.

That led some observers to hope they’d bring the same passion to fighting for undocumented workers that they’ve brought to fighting against, say, gay marriage or abortion clinics. Perhaps there would be fiery sermons denouncing the unfairness of keeping undocumented workers in the shadows, telephone banks set up to call members of Congress, and massive political demonstrations demanding legislation granting a path to citizenship.

But, alas, that was not to be. Instead, evangelical leaders are themselves divided: a counter group called Evangelicals for Biblical Immigration (whatever that may be) opposes the Senate’s call for a path toward citizenship. Among that group’s most active supporters are several leaders of the tea party movement, whose pronouncements provoke more fear in Republican politicians that any tent revival preacher ever could.

Meanwhile, few evangelical flocks have taken up the cause of their undocumented brothers and sisters with any passion or urgency. Here and there, a few have protested the meanest restrictions, such as those passed by the Alabama legislature in 2011. Some Alabama churches, for example, actively opposed provisions that could have penalized a motorist who drove an undocumented newcomer to church.

Still, there has been nothing resembling the outrage over gay marriage, which evangelical preachers continue to attack with relish. There haven’t been the sustained protests that still inspire Republican state legislatures to curb reproductive freedoms. So it’s no surprise that GOP lawmakers have gotten the message: No matter what a few evangelical leaders have said, most of their members don’t want undocumented immigrants given the full rights of U.S. citizenship.

Later this month, the Evangelical Immigration Table will convene a day of “prayer and action” in Washington, but leaders have already signaled their willingness to accept a deal with the devil, refusing to pressure GOP lawmakers to keep a path toward citizenship as part of any bill. At this stage, it seems only heavenly intervention can resurrect comprehensive immigration reform.