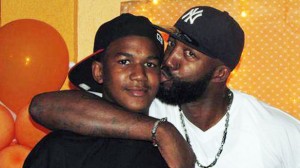 Trayvon Martin with his dad

As a matter of history, black Americans — at least those who were allowed to vote — were Republicans for decades after the Civil War. But some found Franklin Roosevelt’s New Deal attractive, and most found Lyndon Johnson’s support for civil rights irresistible. They left the Republican Party.
And they’ve stayed away since the 1960s, alienated by the GOP’s Southern strategy of race-baiting and pandering to the prejudices of rightwing Neanderthals. If you wonder why black voters believe the Republican Party trades in the rankest bigotry, look no further than the reaction to the George Zimmerman verdict among conservative commentators. It’s been appalling.
Let me be clear: It’s perfectly reasonable to believe the Zimmerman jury arrived at the only acceptable verdict. Many analysts, including some black commentators, have stated that the prosecution simply did not prove its case.
But several conservative pundits have gone well beyond reason, smearing Trayvon Martin, indicting his friends and elevating Zimmerman to sainthood. They’ve shown a callous disregard for the grief that still envelopes Martin’s parents. They’ve suggested that whites are more likely to be the victims of discrimination in the criminal justice system than blacks.
And those commentators, luminaries such as Rush Limbaugh, are widely regarded as leading representatives of the GOP. How could it be otherwise when Republican pols kowtow before them, engage them as campaign surrogates and dare not criticize them?
Thoughtful Republicans — the moderates and right-leaning modernists who accept diversity — need to convene a meeting to take their party back and restore the brand to its pre-1960s luster. They ought to name their group “Republicans Against Racism.”
They will have to be prepared to call out and criticize the insensitive claptrap and vitriolic nonsense that gets bandied about not only by Limbaugh but also by other well-known conservative pundits, many of whom have been in the ugly business of de-humanizing and
defaming the young Martin since his death drew public attention last year. They have portrayed Martin as a thug, a drug addict, a predator who deserved to die.
To stick with a prominent example, Limbaugh recently dedicated a show to mocking prosecution witness Rachel Jeantel — whom Martin talked to on his cell phone as Zimmerman followed him. Limbaugh claimed that Martin was a homophobe who “attacked” Zimmerman, believing he was a “pervert.”
Have there been similarly outrageous comments from talking heads on the left? Of course. The verdict has prompted name-calling, hot-headed denunciations and racial demagoguery from a lot of folk who ought to know better.
But there is a significant difference: There are precious few significant ties between the Democratic Party apparatus and liberal commentators. When voters think of Democratic leaders, they think of President Barack Obama, who has been quite cautious in his response to the Zimmerman verdict, as he usually is on issues of race. Or they think of Attorney General Eric Holder, who has been more voluble, but equally cautious.
By contrast, a Republican Party in disarray has no clear leaders. After his loss to Obama, Mitt Romney has retired to private life. His running mate, Paul Ryan, has retreated to budget battles. House Speaker John Boehner can barely manage his caucus, much less speak for Republicans on a national stage.
Limbaugh, Sean Hannity, Ann Coulter and others have happily stepped in to the void, presenting themselves as senior strategists for the GOP. And party leaders have allowed them to get away with it.
A few Republicans recognize the problem that poses. MSNBC talk show host Joe Scarborough, a former GOP congressman, wrote recently that “many conservative commentators were offensive in their reflexive defense of Zimmerman, as well as their efforts to attack the integrity of a dead black teenager.” He concluded that the GOP can’t expect to attract black voters as long as so many of its emissaries are flagrantly and intentionally offensive.
Scarborough is right. Surely, there are other Republicans who recognize the dangers of having their party represented by loudmouths who trade in racial hostility.