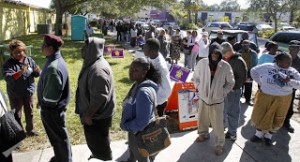 Now that the U.S. Supreme Court’s hyper-conservative faction has neutered the Voting Rights Act, Republican officials around the country have re-energized their campaign to block citizens of color from voting.
Florida Gov. Rick Scott surprised no one last week when he announced that he would resume a controversial and clearly partisan purge of the voting rolls, supposedly to clear them of non-citizens. Nor is there any shock in the decisions by officials in Texas, Alabama and Mississippi to proceed with harsh new voter ID laws.
While Republicans contend the new laws and purges are necessary to protect the integrity of the ballot, that stale defense no longer merits extensive debate. It’s obvious that GOP activists have but one purpose in changing laws that affect voting and registration: putting up obstacles that might suppress the franchise among voters who usually support Democrats.
Actually, a few have admitted as much. Last year, Republican Mike Turzai, House Majority Leader in the Pennsylvania legislature, bragged about the passage of a strict new voter ID law, claiming it would “allow Gov. Romney to win the state of Pennsylvania.” Though Romney lost Pennsylvania on his way to overall defeat, the state’s GOP chairman still said earlier this year that voter ID “probably helped a bit” in cutting President Obama’s margin of victory from 2008.
A similar admission came from Republican campaign consultant Scott Tranter when he spoke at a post-election analysis hosted last December by the Pew Center on the States. He dismissed the idea of bi-partisan cooperation to eliminate the long lines and other dismal conditions that had plagued voting in many areas.
“. .At the end of the day, a lot of us are campaign professionals and we want to do everything we can to help our sides. Sometimes we think that’s voter ID, sometimes we think that’s longer lines, whatever it may be,” Tranter said.
Not that you needed those admissions to know that the GOP-led campaign to “protect the integrity of the ballot” is phony, the 21st century version of the poll tax. Remember when Alan Wilson, South Carolina’s Republican Attorney General, claimed last year that hundreds of dead people had voted in his state?
Ah, never happened. As you might expect, zombies have little interest in electoral politics. State authorities investigated and found no ¬— zip, zero, zilch ¬— zombie voters there.
Wilson made his claims in defense of a strict new voter ID law, one of the GOP’s more popular methods for suppressing the franchise. Supposedly, the requirement for showing state-sponsored identification, such as a driver’s license, would prohibit not only the dead but also other unworthies who claim to be legitimate voters. There is just one problem with that theory: Voter impersonation is virtually non-exist.
But voter ID laws do serve the purpose for which they are actually intended. They pose an obstacle for thousands of elderly and poor Americans who lack driver’s licenses, most of whom tend to support Democrats.
Florida, where Scott is proceeding with his purge, is a particularly interesting case. According to Florida Democratic strategist Steve Schale, the state has gained 1.5 million registered voters since 2006. Of those, 61 percent are blacks or Latinos, both strong constituencies for the Democratic Party. It’s no wonder, then, that Florida Republicans have worked so hard to block the franchise among those voters.
You may have noticed, though, that voter suppression hasn’t helped the GOP win presidential elections in the last two cycles. Indeed, their tactics may have given Obama the winning edge in Florida in 2012: Black voters were so angered by obvious attempts to discourage them from voting that they turned out in huge numbers, enduring long lines.
Given that reality, some conservatives believe the GOP should give up its emphasis on blocking the ballot. As The New York Time’s Ross Douthat has written: “the G.O.P. is …sending a message to African-Americans that their suspicions about conservatism are basically correct, and that rather than actually doing outreach to blacks the right would rather not have them vote at all.”
Indeed, there is no reason for black voters to believe anything else.