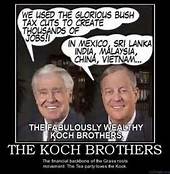 Even acknowledging that our national politics have become increasingly contentious, here’s a development that is really odd: two billionaire brothers are spending millions of dollars to try to persuade young Americans not to buy health insurance. What’s up with that?
The industrialist Koch brothers, David and Charles, are among the very richest Americans — indeed, the very richest people on the planet. They are not merely members of the one percent; they’re in the topmost fraction of the one percent.
That means that they not only can afford to buy health insurance for themselves, but they can also buy physicians, hospitals, medical labs and pharmacies if they choose to do so. They have access to the very best medical care that money can buy — and, in America, that’s the difference between life and death.
But unlike, say, Bill Gates, the founder of Microsoft, the Koch brothers have not concerned themselves with trying to make life a bit more comfortable and pleasant for others. Oh, no. The Koch brothers are the very stereotype of the greedy and selfish hyper-rich, the poster boys for self-interested plutocracy. They want to control the country’s politics — no matter who gets hurt in their grab for power.
That’s why they’ve funded ultra-conservative candidates and political causes over the past couple of decades. Their to-do list includes aiding the effort to torpedo the Patient Protection and Affordable Care Act, popularly known as Obamacare. Among the political groups they fund is an outfit called Generation Opportunity, which is running a creepy ad to persuade young women of a lie: that Obamacare comes between a patient and her physician.
The Koch brothers know that the new health care paradigm depends on enlisting healthy young adults — people who tend to take the risk that they don’t need health insurance — into the system. If they don’t sign up, the new exchanges won’t have enough vigorous and youthful Americans to help pay the way for the sick and frail. Insurance companies need to be able to spread the costs around so they don’t go bankrupt trying to care for the ailing.
But the Koch brothers, like most conservatives, want Obamacare to fail. They are not concerned that the new health care law, which would extend insurance to the vast majority for the first time in history, is a “government takeover” of medicine or a “jobs-killer” or a ruinous new entitlement. None of that is true. (See factcheck.org or Politifact.com for actual facts about Obamacare.)
Nope, the real concern of most conservatives is that Obamacare will work, proving popular over the long run. Think about it: If they are so certain that the law will collapse under its own weight, why not step aside and allow it to do so? Why do they need to try to defund it and create creepy ads trying to persuade young people not to buy in? Why did they warn the National Football League not to promote the new health care exchanges?
If Obamacare succeeds, the generations-long conservative war against activist government would have lost another major battle, and more voters would be persuaded to vote for progressives. That’s the reason that conservatives went all out to defeat President Clinton’s similar health care proposal during his first term.
As Weekly Standard editor William Kristol, then fresh off his stint as vice-president Dan Qualye’s chief of staff, wrote in 1993: “…the long-term political effects of a successful Clinton health care bill will … relegitimize middle-class dependence for ‘security’ on government spending and regulation. It will revive the reputation of the party that spends and regulates, the Democrats, as the generous protector of middle-class interests.”
There you have it. They don’t dare allow Obamacare to proceed unimpeded because Americans might come to like it and depend on it, as the elderly like and depend on Medicare. Indeed, conservatives, including Ronald Reagan, fought the creation of Medicare, claiming it was pure socialism.
Meanwhile, the Americans who would suffer most if Obamacare doesn’t succeed are those without health insurance and the promise of decent medical care. That includes the young adults who will be victims of terrible accidents or unforeseen diseases. Not that the Koch brothers care about them.