GOP’s cruelty and hypocrisy on hunger

GOP’s cruelty and hypocrisy on hunger 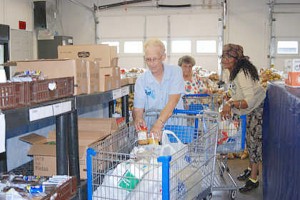 For decades now, the Republican Party has been honing its reputation for hostility toward the downtrodden, the poor, the disadvantaged. While a few of its leaders have tried to either shed that image or to dress it up with a more appealing façade — think George W. Bush’s “compassionate conservatism” — lately, the GOP has been enthusiastically embracing its inner Ebenezer Scrooge.

Consider its all-out assault on one of the government’s most venerable programs to assist the most vulnerable, the Supplemental Nutrition Assistance Program, usually known as “food stamps.” Last month, the GOP-dominated House passed an agriculture bill that omitted funding for the food stamp program — partly because the Republican caucus disagreed over whether cuts to the program should be merely harsh or extremely severe. Congressional conservatives have said they also want to include a work requirement and mandatory drug tests for beneficiaries.

Not so long ago, hardliners sought to cloak this sort of cruelty in the language of the greater good — the need to reduce government spending. But last month’s bill didn’t even attempt that pretense: It included billions in agricultural subsidies to wealthy farming interests, including some Republican members of Congress. It was the first time since 1973 that a House of Representatives has omitted the food stamp program from the farm bill.

“It sounds to me like we’re in a downright mean time,” said Bill Bolling, founder and executive director of the Atlanta Community Food Bank, which procured and distributed 45 million pounds of food and groceries in the last year. He said that his agency has doubled its distribution over the last four years, since the Great Recession devastated household incomes.

The profile of his client base has changed, too, over the last four years, he said. About 20 percent of beneficiaries report that this is the first time they’ve ever asked for assistance from government or charitable programs. Among them are people who once belonged to the secure middle class; some were formerly donors or volunteers to the food bank.

Moreover, Bolling said, about half the people who seek food assistance have jobs.

“They’re keeping their part of the social contract. They are getting up everyday and going to a job, maybe two jobs. If a man gets up and goes to work everyday, I don’t care what his job is, he ought to be able to feed his family,” he said.

Conservative critics paint a very different picture. They tend to speak contemptuously of those struggling to make ends meet, to describe a lazy “47 percent” who want nothing but hand-outs, to dismiss those who can’t make ends meet as responsible for their own hard luck.

Some of that hostility toward struggling Americans can be explained by a racial antagonism that presumes that most of them are black or brown. In “Us Against Them: Ethnocentric Foundations of American Opinion,” University of Michigan professor Donald Kinder and Vanderbilt professor Cindy Kam explain that means-tested programs such as food stamps have long been associated with the black poor. That makes them more likely to be viewed with suspicion by “ethnocentric” whites — those more likely to be antagonistic toward other racial groups.

Kinder and Kam say that public discourse by political “elites” — especially those on the conservative side of the spectrum — has “racialized” means-tested welfare programs. “Programs like . . .food stamps are understood by whites to largely benefit shiftless black people,” they write.

Not that the facts tend to matter in a debate such as this. Nor do common decency and simple compassion hold much sway. If they did, there would be far fewer parents worrying about how to feed their children tonight.