Gun culture: Still crazy after all these years

Gun culture: Still crazy after all these years 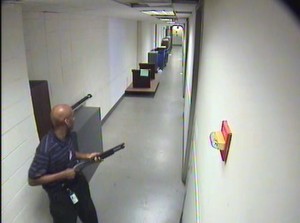 Alexis, minutes before the rampage (FBI)

Last week’s horror at the Washington Navy Yard barely interrupted the stale political chatter, the dueling poll-tested messages, the sensational reports on the latest celebrity divorce or stint in rehab. While the newest mass shooting did preoccupy reporters for a couple of days, its import — at least judged in headlines and cable hours — quickly faded.

It was just another day of horrifying gun violence in America. The public has grown inured to the death toll, complacent about the destruction. If 20 dead babies at Sandy Hook didn’t move us to act, well, what will? When will the United States recover from this insanity — this sense that we are cannot or should not rein in guns?

The “rampage” shooting has become a feature of contemporary culture, a peculiarly American perversion. It occurs in a few other countries but not with the frequency with which it strikes here.  This sort of crime — this kind of atrocity — generally stars an angry and deranged man determined to take out his wrath on strangers before going out in a blaze of glory. And there has been a troubling uptick in bloodbaths like this over the last decade.

The gun lobby would no doubt point out that, overall, gun violence has declined over the last several years. That’s true. As crime of all kinds has decreased, so have murders and assaults with firearms. But the “rampage” mass shooting has become more deadly even as more routine gun violence, the sort associated with monetary gain or personal revenge, has decreased.

Earlier this year, the Congressional Research Service issued a report, “Public Mass Shootings in the United States,” that catalogued 78 mass shootings between 1983 and 2012. They accounted for 547 deaths and and an additional 476 injuries. The Washington Post has pointed out that half of the deadliest of those — Virginia Tech, Aurora, Sandy Hook, Binghamton, Fort Hood and the Navy Yard — have occurred since 2007.

Experts have begun to focus, appropriately, on missed signals about the mental state of accused shooter Aaron Alexis, who told Rhode Island police officers that he was hearing voices. Certainly, the United States needs to do much better in providing mental health care to every citizen who needs it.

But it would be much more practical to focus on reining in guns. As any therapist would tell you, it’s very difficult to predict which patients may turn to violence. Alexis reportedly saw doctors at the Veterans Administration, but he told them he didn’t present a danger to anyone.

Sensible firearms measures would fill in the gaps that our mental health system can’t straddle. Such limits would curb the bloodshed without infringing on the rights of any citizen who wants to hunt wild game or defend his home. Shouldn’t it be at least as difficult to get a firearm as it is for me to get a prescription for a sinus infection?

Take the simple matter of a waiting period. Alexis apparently purchased a pump-action shotgun he used in his massacre two days earlier. With a few more days, various law enforcement and military entities may have pieced together his arrests for firearms violations and a report of his auditory hallucinations, which was apparently forwarded to naval authorities.

Other sensible measures — including a ban on high-capacity magazines — might not have deterred Alexis, but they would have curbed the violence from other shootings. And they would not infringe on the rights of the average gun owner. The Second Amendment does not espouse unlimited freedom to own the most dangerous firearms on the market.

Is the mass shooter the biggest crime problem remaining in America? By no means. But gun deaths are still a huge public health problem.

According to the Centers for Disease Control and Prevention, the U.S. will see more deaths from firearms than from car accidents by 2015.

Since the 1960s, we’ve made a series of law and policy changes that have reduced the carnage on our highways. We’ve done the opposite with firearms, as various states have approved laws allowing guns in bars, parks and even churches.