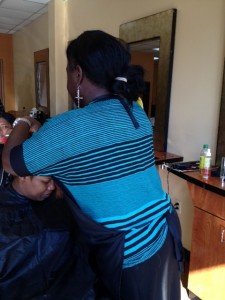 Rena W. is a 35-year-old small business owner — the co-owner, actually, of an Atlanta hair salon. She works hard but doesn’t make enough money to purchase health insurance.
A mother of three, Rena has high cholesterol and hypertension. Last month, she suffered a mini-stroke, a calamity that brought confusion, a brief bout of aphasia and a trip to the emergency room. She has recovered but now owes the hospital $17,000 for her treatment, a debt that she says will take her years to re-pay.
Rena is just the sort of hard-working American for whom the Patient Protection and Affordable Care Act — routinely called “Obamacare” — is designed. She can now purchase a policy that will pay for the medical care she needs and ensure against any more medical emergencies. (If only she’d had that insurance a bit sooner, she would not be burdened by debt.)
But for reasons that are hard to grasp, Republicans are apparently willing to throw the American economy over the cliff — and to further destabilize an already-shaky global economy, as well — just to keep Rena from being able to buy affordable health insurance. If the government shutdown doesn’t force President Obama to forsake his signature legislative accomplishment, many Republicans say, they will refuse to lift the debt-ceiling, sending the country into default for the first time in history.
Again, this is all to prevent people like Rena from being able to purchase health insurance.
Having listened to the inflammatory, paranoid and highly creative debate over Obamacare since 2009, having witnessed countless tea party rallies and heard numerous critics outline the law’s alleged dangers, I still don’t understand the motives of its most deranged adversaries. I do know that all the other industrialized democracies ensure that the vast majority of their citizens have access to medical care, and none of those nations have gone up in smoke. They endure, with populations who are at least as healthy as Americans and who pay much less for their doctor’s visits and medicines.
Here in the United States, conservatives have railed against an expanding social safety net at least as far back as Franklin Roosevelt’s New Deal, which birthed the Social Security system to prevent old-age penury. The campaign to create Medicare brought similar warnings of dire consequences, with no less a true-blue conservative than Ronald Reagan insisting that it would put the country on the slippery slope to socialism.
In a recorded message, he told listeners that if they didn’t oppose the creation of government-sponsored health care for retirees, “one of these days you and I are going to spend our sunset years telling our children, and our children’s children, what it once was like in America when men were free.”
As you know, none of those dire predictions came to pass, and both Social Security and Medicare are wildly popular. Still, that hasn’t stopped a certain mind-bending cognitive dissonance: many in the Republican Party’s tea-party camp, where Obamacare is regarded as the devil’s own handiwork, are themselves beneficiaries of Medicare, which is closer to socialism than virtually any other government program. Go figure.
Among conservative intellectuals, it’s popular to pretend that Republicans will eventually replace Obamacare with a much better program that would promote affordable health care without any of the alleged flaws of the current law. But the most honest among them admit that Congressional Republicans have no current plan to replace Obamacare, only to repeal it.
Rena had managed, until now, to avoid medical crises by buying her prescriptions from discount pharmacies and paying out of pocket for annual check-ups. Her children are covered by Medicaid. She is married, but her husband also lacks health insurance — which contradicts the popular notion that single motherhood is to blame for the growing crisis of the have-nots.
She is one of those who plays by the rules, working hard and hewing to the American dream. She’s an owner of a genuine small business, not a wealthy law partner or successful online entrepreneur of the sort Republicans tend to point to when they talk about “small business owners.” Aren’t conservatives big supporters of that commercial sector?
So why, again, are Republicans so furious that she will be able to purchase health insurance?