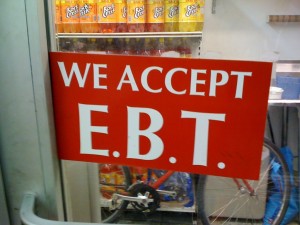 For decades, I’ve proudly asserted that “nobody starves to death in America.” The comment has been addressed to acerbic critics of the American government, often foreign visitors, who insist that the United States is a mean-spirited place that casts aside its weak and fragile citizens.
I still contend that nobody starves to death here, but I’ve had to modify my claims about the country’s social safety net. Even if no one dies for lack of basic nutrition, plenty of people go to bed hungry every night. And if Congress’ harsh Republican caucus has its way, some may starve.
That’s because the band of ultra-conservatives who control the House are bent on deep cuts to the Supplemental Nutrition Assistance Program, otherwise known as food stamps. They passed a farm bill laden with welfare for farmers, but they left out one of its biggest traditional components: food stamps. It was the first time since 1973 that the nutrition program had been left out of the farm bill.
Now, negotiations have started between the Senate and the House to try to reconcile the upper chamber’s more charitable version with the one the lower chamber put together. It will be a tough slog since the two bills are billions of dollars apart. The Senate wants to cut $4 billion from SNAP over ten years, while the House wants to cut nearly $40 billion.
Perhaps the most appalling thing about the farm bill presented by the ultra-conservatives in the House is that it makes little pretense of cutting spending by ferreting out wastefulness or fraud, no feint at an all-out assault on the deficit. Instead, this is just a base and ugly assault on the working poor.
Oh, conservatives claimed that their cuts to food stamps were in response to fraud, as their claque filled the airwaves with the same example of a carefree California surfer enjoying his “wonderful” life on food stamps. They neglected to point to government data which show that SNAP is among the most efficient of government programs, with fraudulent spending restricted to about two percent of its budget.
Meanwhile, the same conservatives have said nothing — nothing — about the millions of dollars in fraud related to farm subsidies. A June audit by the Government Accountability Office found that millions of dollars in subsidies have been sent to farmers who’ve been dead for at least a year. That’s just the illegal stuff.
That doesn’t touch the entirely legal fraud: The entire network of agricultural subsidies is a massive boondoggle, welfare to people who hardly need it. While conservatives hector the working poor about their alleged laziness, some agricultural programs pay farmers not to plant. Why don’t Fox News and Rush Limbaugh ever talk about that?
Farmers hardly need the money. (Forget about the struggling family farmer of lore. He has largely disappeared.) Earlier this year, the Agriculture Department projected that farm income in 2013 would be $128.2 billion, the highest since 1973.
One of the more egregious examples of the sheer hypocrisy surrounding the debate over the farm bill was revealed by The New York Times, which wrote about U.S. Rep. Stephen Fincher (R-Tenn.). He voted for the bill that eviscerates SNAP, but he received nearly $3.5 million in farm subsidies from the government between 1999 and 2012, according to the Times.
“We have to remember there is not a big printing press in Washington that continually prints money over and over,” he said, apparently without irony.
Conservatives claim to be alarmed by the dramatic increase in food stamp outlays, up 77 percent since 2007 to a record high of $78.5 billion in fiscal year 2012. (The SNAP program is already scheduled for a five percent cut as a provision related to the 2009 stimulus bill lapses.) But that’s because so many more people are struggling to make ends meet.
The Great Recession accelerated a trend that has hollowed out the middle class, leaving many Americans without college degrees in a downward spiral. The U.S. Department of Agricultural estimates that nearly 49 million Americans are “food insecure” — bureaucratese that means they don’t have enough to eat.
If we aren’t willing to see to it that they have basic nutrition, I’ll have to reconsider what I believe about my country.