On Obamacare, president’s credibility at stake

On Obamacare, president’s credibility at stake 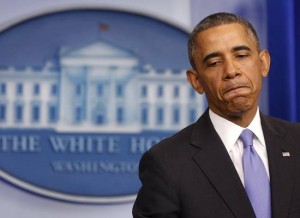 President Obama deserves forbearance on the bungled rollout of his health care initiative. After all, Republicans have dedicated themselves to sabotaging the law — withholding funds required for a smooth inauguration, harassing the experts hired to explain the law to consumers and even threatening the National Football League when Obama asked teams to advertise it to their audiences.
Still, Obama deserves all the blame for the deception that may be the biggest threat to his signature legislative achievement — and his legacy. He must have known better when he told Americans repeatedly over the past five years that they could keep their insurance policies if they were happy with them. As countless policy-holders have learned over the past few weeks, that’s simply not true.
Early on, the president was careful in his descriptions of the Patient Protection and Affordable Care Act. Speaking to a joint session of Congress in 2009, he said, “If you are among the hundreds of millions of Americans who already have health insurance through your job, or Medicare, or Medicaid, or the VA, nothing in this plan will require you or your employer to change the coverage or the doctor you have.” The veracity squad at Politifact rated that statement “true.”
But as Obamacare, as it is now widely known, picked up a dedicated and vociferous group of critics, the president grew careless. In countless speeches in the last three to four years, he dropped the nuances: “If you like the (health insurance) plan you have, you can keep it.”
Just as more Americans were beginning to pay attention to a mandate that will go into effect in 2014, that flawed description became Obama’s mantra. Now, as insurers send out cancellation notices, many consumers feel betrayed. And that includes some of Obama’s most loyal supporters.
Writer Peter Richmond, who has purchased his health insurance through a small group affiliated with a local Chamber of Commerce in upstate New York, was stunned to learn recently that his insurer was dropping the group.
“(Obama) spoke so vehemently about our being able to keep our coverage. . .I feel betrayed for the first time by (this) president.. I resent it a great deal,” he said.
At a recent Congressional hearing, Sen. Barbara Mikulski, a liberal Democrat from Maryland, weighed in, contending that the cancellation notices were creating a “crisis of confidence” about Obamacare. She’s right.
On balance, the cancellation notices are affecting a miniscule group of Americans — those who don’t get insurance from their employers but who purchase it in the individual market. They represent about five percent of the population. There are no exact figures on the number receiving cancellation notices, but experts have given estimates ranging from seven to 12 million people.
To be fair, many of them will be better off. Obamacare has virtually abolished their old “bare bones” policies, some of which didn’t even pay for hospital stays. With subsidies, many consumers will be able to buy far superior health insurance policies for less money. Kaiser Family Foundation health care expert Larry Levitt told CBS News that “the winners will outnumber the losers.”
Still, there are many customers who are experiencing genuine rate shock. They will be stuck paying a higher premium for health insurance policies they may not have wanted. That’s bad enough, but it’s made worse by the fact that Obama misled them.
At the moment, Obamacare is a morass of confusion: dysfunctional Web sites, lies spread by its critics and even deceptive practices by some insurance companies. That’s all the more reason that Americans need to be able to trust their president to tell them the truth about his health care overhaul — even if some of that truth is unpleasant.
Obama needs to stand up and admit that he misled consumers about keeping their health care plans. He needs to take his lumps and promise to give the public straight-forward and truthful answers.
If he keeps prevaricating, he will be doing as much damage to Obamacare as its harshest critics.