Bar the poor from emergency rooms?

Bar the poor from emergency rooms? 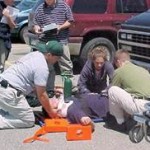 During a Republican primary debate in the last presidential election cycle, there was a dispiriting moment in which tea party audience members cheered at the idea that a comatose uninsured American — unable to afford health insurance — would be left to die. That infamous outburst, among others, has prompted GOP bigwigs to try to cut back on primary season debates, hoping to limit appearances that might expose the party’s baser impulses.
But that mean-spirited and contemptuous attitude toward the sick is alive and well in the Grand Old Party, as its maniacal (and futile) resistance to Obamacare has made clear. Now, one Republican politician is pushing that callousness to new lows: He wants to bar the uninsured from hospital emergency rooms.
Last week, Georgia Gov. Nathan Deal criticized a decades-old federal law that requires all hospitals that receive Medicare funds and have emergency facilities — and that’s most — to treat any patient who walks in needing care, regardless of his ability to pay. “It came as a result of bad facts,” Deal said, according to The Atlanta Journal-Constitution. “And we have a saying that bad facts make bad law.”
Deal says that many people use emergency rooms unnecessarily, and those patients inflate health care costs. He is factually correct. But there are other facts that undercut his arguments and reveal his hypocrisy.
First off, Deal is among those red-state Republicans who have vociferously opposed the Affordable Care Act, which makes health insurance available to hundreds of thousands of people who couldn’t afford it. If more people had health insurance policies that paid for doctors’ visits, fewer would use emergency rooms for routine complaints.
Second, Deal, like many Republican governors, has refused the Medicaid expansion made possible by Obamacare, even though the federal government would pick up 100 percent of the cost for the first three years and 90 percent until the year 2022. That expansion is the best chance many Georgians without means have for getting health insurance.
So, to sum up, Deal hates Obamacare and refuses its Medicaid expansion, which would keep the working poor out of emergency rooms. In addition, he wants to deny them access to emergency rooms unless they can pay. Really, governor? Don’t you insist that your values are “pro-life”?
It’s no wonder that GOP strategists shuddered when audience members responded so cruelly during the CNN/Tea Party Express debate in September 2011. It portrays the party as pitiless — a reputation unlikely to attract a majority of voters.
Quiet as it’s kept, most Americans support keeping Obamacare, despite the relentless pounding it has taken from Republicans. (And despite a website rollout that was infuriatingly incompetent.) A new poll by the Kaiser Family Foundation found that 56 percent of Americans favor keeping it in place, while just 31 percent want to repeal it. (Twelve percent want to replace it with a GOP plan.)
That’s likely because most voters, no matter their reservations about Obamacare, know that the Republican Party has no good solution for the millions of Americans who work every day but still don’t earn enough money to buy a health care plan. Americans have struggled with the nation’s dysfunctional health care “system,” and they know it’s overdue for an overhaul.
Meanwhile, as the mid-term elections draw closer, the GOP struggles to come up with a plan that pretends to overhaul the health care system. Looking to avoid being painted as mere obstructions, House Republican honchos are working to draw their caucus together behind a bill that would replace Obamacare with a workable alternative.
But the most sincere plan so far — one offered by Sens. Richard Burr (R-N.C.), Tom Coburn (R-Okla.) and Orrin Hatch (R-Utah) — would probably offer policies too skimpy to do any good once a policy-holder gets sick.
Besides, even that replacement idea seems unlikely to draw broad support among the far-right tea partiers, who believe that allowing the uninsured poor to die is the appropriate government response to the health care crisis.
That’s a hulking bit of hypocrisy for a party that advertises itself as “pro-life.” Deal’s latest proposal is one more reminder of how little that label means.