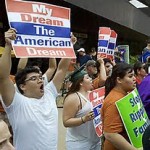 If you think the only reasons to welcome undocumented workers are generosity and compassion toward the “other” — to be welcoming to the stranger — you’re wrong. There is a very selfish reason to offer legal residency to the men, women and children who arrived here without papers: The United States needs all the younger workers we can get.
This country, like much of the industrialized world, is in the midst of a demographic crisis, a slow-moving but quite evident population bust that will erode our standard of living and threaten our way of life. Simply put, we don’t have enough children and young adults.
One of the easiest fixes Congress could make would be to pass an immigration reform plan that makes citizens of the illegal-border-crossers among us, most of whom are still working age. That’s why they came.
But members of Congress rarely link the two, partly because the aging population isn’t an easy crisis to discuss. Politicians don’t like to bring it up because it sounds like an attack on senior citizens — the very age group most likely to vote.
But this isn’t a call to start putting the elderly out on an ice floe to speed their demise. Instead, it’s a clear-eyed look at a demographic reality and a proposal to help ease the population bust.
A January report from the Congressional Budget Office laid out the problem: “Beyond 2017,” said the report, “CBO expects that economic growth will diminish to a pace that is well below the average seen over the past several decades. . . The projected growth rate . . . is slower than that during previous economic expansions for several reasons. The first is slower growth in the potential labor force …resulting from long-term demographic trends, namely, the aging of the population and retirement of the baby-boom generation.”
That’s about as clear a statement as you can get in a report written by demographers and economists. And, if you consider the labor market, you can easily understand it: Pre-retirement age folks fuel the economy — filling jobs, creating businesses, paying taxes. They are the ones who pay for Social Security and Medicare, the entitlement programs for the elderly. (The tax payments of current retirees were spent on earlier generations.)
If you want to see what happens when a country begins to age, just take a look at Japan, which has been stuck with a moribund economy for more than a decade. Several factors converged to doom a once-enviable growth engine, but a birthrate that dropped below replacement level played a major role.
Europe, too, has been hard hit by the demographic bust. While the fiscal misfortunes in Greece have been blamed on corruption, lavish pensions and cultural practices that include stiffing the tax man, one of that nation’s fundamental challenges is its aging citizenry.
According to government figures, 19 percent of the Greek population is 65 years of age or older, while about 14 percent is under 15. Meanwhile, its average retirement age is 61, and the life expectancy is 79 years.
That’s a recipe for debt-driven disaster. There are simply not enough young workers to support that many retirees. No austerity program, no matter how severe, can save the country from its gloomy fate.
The United States has been luckier that many industrialized nations. Because of a range of cultural factors, American women tend to have more children than their European counterparts. But immigrants have been our salvation; their birthrates tend to be higher than those of native-born women. That means we haven’t yet suffered the demographic fate of Japan and Greece.
But we haven’t solved the problem of an aging America, either. We need more younger workers to support the huge Baby Boom generation, whose retirement will overwhelm the system. Fiscal conservatives are right to argue for reforming Social Security and Medicare before they go bankrupt.
But too many conservatives refuse to acknowledge the nation’s need for the children and adolescents born to those who crossed the borders without documents. We ought to welcome them.