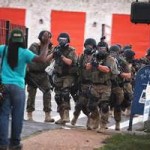 A Rip Van Winkle who fell asleep in 1968, awakening now, would see TV news footage that was achingly familiar: An American city under siege as mostly white police officers, firing tear gas, face off against mostly black civilian protestors, some violent but most just angry. The two elections of a black president notwithstanding, some things haven’t changed very much.
Among those areas where little progress has been made is the criminal justice system, which still reeks of institutional racism and a plethora of human prejudices. Black men, especially, are viewed as dangerous, predatory, criminally-inclined. They are not usually given the benefit of the doubt — not viewed as innocent until proven guilty — by white police officers, prosecutors or jurors.
That helps explain the anger that has exploded in Ferguson, Mo., where black residents make up 67 percent of the population but black drivers accounted for more than 86 percent of the traffic stops last year, according to a report by the Missouri Attorney General. Police in Ferguson, a St. Louis suburb, searched 12.1 percent of black drivers they stopped, compared to 6.9 percent for whites.
Are black drivers more likely to carry illegal substances? No. Contraband was found 22 percent of the time when the driver was black and 34 percent when the driver was white. The police department, by the way, has three blacks among its 53 officers, according to The Washington Post.
The troubling racial disparities do not absolve the looters, the rioters, the thugs who have attacked police and damaged property since protests began. There is no excuse for criminal conduct; moreover, it detracts from legitimate gripes with the police. Those who use the protests as cover to steal or toss Molotov cocktails should be arrested and prosecuted aggressively.
However, it’s also true that police officers, sworn to protect the public, have a duty to act without causing more harm. Let’s remember how the troubles began: An unarmed black man, 18-year-old Michael Brown, was shot dead by a police officer. What brought this young man to the cop’s attention? Was he breaking into a car or assaulting a passer-by? Nope. He was walking in the street.
The police officer who shot Brown after ordering him to the sidewalk claims he was attacked and a struggle for his gun ensued. However, one of Brown’s friends, a witness to the episode, tells a very different version of events. President Obama, while calling for calm, said he had ordered the FBI and the Justice Department to investigate.
That’s a step in the right direction — but it’s not nearly enough. If demands for justice come mostly from black voters, if a thorough investigation is seen as a predictable political response from a black U.S. Attorney General, if outrage is voiced only by the talking heads at the liberal outpost of MSNBC, then there will be many more Fergusons to come. The overuse of force by heavily militarized police ought to concern every American, not just those most likely to be on the butt end of police rifles.
It’s clear, no matter the details of Brown’s death, that local police have handled the aftermath poorly, inflaming tensions with excessive force. Heavily armed officers in desert camouflage have pointed large-caliber weapons at peaceful protestors. A couple of reporters were arrested last week because, apparently, they failed to move along quickly enough.
If there is any good news here, it’s this: the sense of outrage seems to have finally broken out of the usual bounds of race and partisanship. In an essay published in Time, Sen. Rand Paul (R-Ky.) wrote: “The outrage in Ferguson is understandable—though there is never an excuse for rioting or looting. There is a legitimate role for the police to keep the peace, but there should be a difference between a police response and a military response.”
De-militarizing police departments won’t rid the criminal justice system of endemic racism, but it may help to curb the unnecessary, violent confrontations by officers who have forgotten their oaths to “protect and serve.” And that could keep a few more young black men alive.