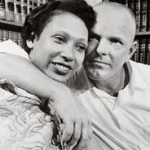 In 1967, the U.S. Supreme Court issued a landmark ruling in an aptly named case called Loving v. Virginia. The court struck down laws that banned interracial marriage so that Richard and Mildred Loving could live together as husband and wife without the harassment of Virginia authorities.
It’s hard to explain that court case to Americans under the age of 35. They find it hard to believe that their country — this great democracy — once countenanced laws that forbade marriage between blacks and whites. But not so very long ago, many states believed they had every right to tell people who to love.
Some states still do. While they’ve moved away from any prohibitions on interracial marriage, they cling to old prejudices against marriages of gay couples.
Just last week, a Louisiana federal court judge ruled in favor of that state’s ban on same-sex unions, insisting that Louisiana has every right to define marriage as it sees fit. The state “has a legitimate interest … whether obsolete in the opinion of some, or not… in linking children to an intact family formed by their two biological parents,” wrote U.S. District Court Judge Martin L.C. Feldman.
The ruling stunned gay rights advocates because it was the first significant setback in the long march to marriage equality since the U.S. Supreme Court struck down the so-called Defense of Marriage Act last year; 21 consecutive federal court rulings have found same-sex marriage bans unconstitutional.
If you believe that judges are neutral arbiters of the law, well, you haven’t been paying attention. Feldman, a Reagan appointee, perfectly reflects the social mores of his ultra-conservative region.
His ruling was a tour de force of ancient prejudices and antediluvian nonsense, including his linkage of marriage and procreation. As a middle-aged newlywed with an adopted daughter, I wonder whether he thinks my heterosexual union is less legitimate because my husband and I will bear no children together.
Feldman said he relied on “a meaning of . . .marriage that has endured in history for thousands of years,” ignoring the fact that slavery, too, endured for centuries. (I must also point out that the meaning of marriage that “endured in history for centuries” allowed a man to marry as many women as he could afford. Yet, the U.S. outlawed polygamy in the 19th century.) And, yes, he trotted out well-worn comparisons between homosexuality and incest: “Must the states permit or recognize a marriage between an aunt and niece? Aunt and nephew? Brother/brother? Father and child?”
While the analogy to the battle over interracial marriage is not a perfect one, there are many similarities. One was the argument that “natural law” — or God’s law — viewed marriage between blacks and whites as abhorrent.
Invalidating the marriage of a black man and a white woman in 1878, the Virginia Supreme Court ruled that “the purity of public morals, the moral and physical development of both races….require that they should be kept distinct and separate… that connections and alliances so unnatural that God and nature seem to forbid them, should be prohibited by positive law, and be subject to no evasion.”
Despite his insistence that he simply followed centuries of tradition, the law that Feldman upheld has a recent vintage — a Louisiana state constitutional amendment banning same-sex marriage that was passed in 2004. Similar amendments were passed in ten other states, the result of a cynical ploy by Karl Rove to assure the reelection of George W. Bush. Rove knew that putting such amendments on state ballots would drive up turn-out among conservative Christians, who usually vote for Republicans.
In the decade since, much has changed. Public sentiment now supports gay unions; a Gallup poll in May found that 55 percent of Americans believe that marriages between same-sex couples should be recognized as legally valid, with the same rights as heterosexual couples.
In 2007, a year before her death, Mildred Loving issued a statement in support of gay marriage. “I am still not a political person, but . . I support the freedom to marry for all. That’s what Loving, and loving, are all about,” she said.
She was right, and, eventually, the U.S. Supreme Court is bound to agree and deliver marriage equality to all citizens. Slowly but surely, the union grows more perfect.