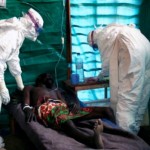 During the summer, I got hooked on a TNT drama called “The Last Ship,” an apocalyptic thriller about a global pandemic that wipes out most of the human population. As it happens, the telltale signs of this killer plague bear a striking resemblance to the symptoms of the Ebola virus.
Indeed, Hollywood has been inspired by Ebola for decades, almost since the virus was first identified in 1976. But in those fictional crises, including that portrayed in the 1995 film “Outbreak,” starring Dustin Hoffman, the virus has changed — either through mutation or human intervention — to become airborne, like smallpox and tuberculosis. If you are a screenwriter, you need that element of quick and easy contamination to sustain edge-of-your seat suspense.
Characters in “The Last Ship,” for example, enter unfamiliar territory fully clad in protective gear for fear of suddenly sharing space with an infected person. They dare not breathe the same air if they expect to survive.
Real-world Ebola, however, isn’t that easy to catch, according to experts at the Centers for Disease Control and Prevention. It has caused a devastating pandemic in West Africa, where the medical infrastructure is poor to-non-existent, but it won’t come close to that here, they say.
Still, judging from the news media, lots of my professional colleagues have seen “Last Ship” and “Outbreak.” They’re in full panic mode, hyping the threat and speculating about the possibility of a global pandemic which swamps the Western world as it has West Africa. That hysteria has only increased since Thomas Eric Duncan died last week in a Dallas hospital, becoming the first Ebola fatality in the United States.
As Dr. William Schaffner, a professor of preventive medicine at Vanderbilt University, told The New York Times, “…at the moment, we have a much larger outbreak of anxiety than we have of Ebola.”
That’s partly due to the madness of partisan politics, where critics of President Obama look for any reason, rational or not, to blast him. Fox Not-News has had a steady stream of commentators blaming the president for Ebola patients in the United States, as if he’s the mad scientist of a Hollywood thriller.
But the 24-hour news cycle also demands hysteria, whether from liberal commentators or conservatives. Fear is one of the most powerful of human emotions, and it drives eyeballs to the TV screen and clicks online. If there is no genuine crisis, a manufactured one will have to do.
It’s also true, psychologists point out, that human beings have difficulty assessing risks. Many Americans, they note, have a fear of flying and would rather drive a long distance because they believe it’s less dangerous to do so. But numbers show that commercial aviation is much safer than doing battle with your fellow road warriors.
In 2012, the last year for which statistics were available, 33,561 people died in motor vehicles in the United States. The number killed in commercial airline accidents that same year? Zero.
If humans better understood risk, we’d focus more on the refusal of some Americans to have their children vaccinated against highly contagious childhood diseases. There is little risk from inoculations, but a grave risk of allowing an illness such as measles or whooping cough to get out of control.
Meanwhile, Ebola is indeed wreaking havoc. Just ask Sama King, a naturalized U.S. citizen who was born in Sierra Leone, one of the countries that has been hardest hit. After 30 years in her adopted country, much of that in Atlanta, she was thinking of returning to the place of her birth. But she has had to put that off to become an activist and fundraiser instead.
“We are grateful for what the international community has done, but it needs to do more. If (international agencies) had intervened earlier, we wouldn’t be where we are now,” she said.
King has worked to increase awareness of the pandemic and to raise money for food and protective gear. She is now focusing on the many orphans left behind in Sierra Leone, children who have nowhere to go, whose relatives may be afraid to keep them because of the stigma associated with Ebola.
Now that’s a genuine crisis.