GOP runs from its record on gay rights

GOP runs from its record on gay rights 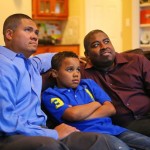 What a difference a decade makes. Ten years ago, Georgia, like several other states, was in a lather over same-sex unions; its voters passed a constitutional amendment banning gay marriage, and that prohibition, though it has been challenged in federal court, still stands.
It was a bi-partisan hysteria. Georgia’s constitutional amendment passed with 76 percent of the vote — many Democrats joining Republicans, blacks and Latinos joining whites, Bible-thumpers joining occasional church-goers to pass a law denying a basic human right to a portion of the population.
But at a debate earlier this month, U.S. Senate candidate Michelle Nunn, a Democrat, declared her support for gay marriage. Polls show that Nunn is in a dead-heat with her Republican opponent, David Perdue, and has a good shot at winning the seat held by retiring Sen. Saxby Chambliss (R-Ga). Nunn clearly believes that backing gay unions is a winning strategy — even in a Deep South state where the religious right still holds considerable political sway.
Meanwhile, Republicans are scrambling to recalibrate their historic hostility to gay rights, trying to walk a tightrope between their aging, narrow-minded base and the moderates and millennials they wish to attract. GOP strategists understand that their party can ill afford to build on the perception that it is a closed tent, bigoted and homogeneous.
Those trends underscore the stunning cultural shift on the issue of gay marriage over just the last few years. When Georgia joined 10 other states in 2004 to ban same-sex unions, millennial voters (the Pew Research Center defines them as the cohort born from 1981-1996) were not a political force, so their liberal cultural views had not yet affected elections. Meanwhile, lesbian and gay activists were struggling to overcome a host of repressive measures.
Ever Machiavellian, Karl Rove stepped up to put the anti-gay-rights sensibilities of that time to use in George W. Bush’s re-election campaign. Rove drummed up support for constitutional amendments banning same-sex unions in state legislatures around the country, hoping that single issue would push marginal but ultra-conservative voters to the polls. Election analysts believe their votes made the difference in the crucial state of Ohio, where Bush eked out a victory.
Now, leading Republican figures have joined the fight for full marriage equality. Ken Mehlman, a gay man who was Bush’s political director in 2004 (and who did nothing to blunt Rove’s cynical strategy), has joined the gay marriage movement. Ted Olson, who served as Ronald Reagan’s solicitor general, has represented gay marriage advocates in court.
Reactions to the U.S. Supreme Court’s surprising — and confusing — decision not to take up the issue of gay marriage during this session were also telling. When the court punted, it left in place lower court rulings allowing gay marriage in several states. In response, many Republican Congressional candidates said absolutely nothing.
“This was something the party largely hoped to avoid talking about, and that’s why they’ve been silent,” Republican strategist Ford O’Connell told The Hill newspaper. “Some of these Republicans in these purple states are finding themselves in a bind. . . if you look at the totality of it, this is not a great situation for Republicans.”
It won’t be easy for GOP politicians to repudiate the position that they have advocated for so long. Perdue — Georgia’s GOP Senate candidate — continues to support that state’s ban, hiding behind the questionable logic of states’ rights.
“As a U.S. senator, I’m not going to get involved in state decisions like this. It’s a constitutional amendment. If that changes, then I will support that with the population,” Perdue has said.
Other Republicans, counting on their backwards-looking base, have kept up the drumbeat of anti-gay-marriage rhetoric. The inimitable Sen. Ted Cruz (R-Texas) called the Supreme Court’s inaction “tragic.”
But recent polls show why the GOP is trying to bury its record. Fifty-four percent of Americans now favor same-sex marriage, according to Pew, and the younger the sample of voters, the more likely they are to support it. Democrats like Michelle Nunn can read those polls, too.