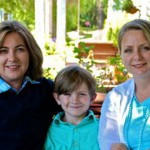 She didn’t mean it.
Alabama state legislator Patricia Todd now says she’s not going to name those among her conservative colleagues who have had extramarital dalliances, although she had threatened to do so. But she has stiffened her resolve about this much: She’ll continue to combat anti-gay bigotry, which is what started this imbroglio.
Todd, a Democrat and Alabama’s only openly gay legislator, was heartened when a federal judge struck down the state’s law banning same-sex marriage earlier this month. The ruling is another sign of the rapid advance of gay rights; if U.S. District Court Judge Callie V. S. Granade’s decision holds, Alabama will be the 37th state to permit gay marriage.
But the ruling was immediately greeted with criticism from Republicans in the state house, who vowed to fight it. State House Speaker Mike Hubbard, for example, pledged to “continue defending the Christian conservative values that make Alabama a special place to live.”
For Todd, that was too much. “What I heard was, ‘We’re going to defend the Christian values of Alabama and family values.’ . .This rhetoric .. .is very hurtful in the gay community,” she told me.
So she took to her Facebook page to warn her colleagues that she would fight back.
“I will not stand by and allow legislators to talk about ‘family values’ when they have affairs, and I know of many who are and have. I will call our elected officials who want to hide in the closet OUT,” she wrote.
Her anger is understandable. For decades, conservative Christians have wielded the Bible as an instrument of division, distorting its message to buttress their bigotry. Worse, they’ve been “family values” hypocrites, indulging their own vices while casting stones at others.
As just one example, U.S. Senator David Vitter (R-La.) was implicated in a prostitution scandal in 2007. He offered an apology for his “sin” and has since been re-elected. He continues, by the way, to oppose gay marriage.
The challenge to Alabama’s ban on same-sex marriage was brought by a lesbian couple, Cari (cq) Searcy and Kim McKeand (cq), who were married in California in 2008 but live in Mobile. The major reason for their nuptials was so that Searcy could be considered a legal parent to their son, whom McKeand gave birth to in 2005, they told the Associated Press. But the state of Alabama refused to recognize their marriage.
Judge Granade, who was appointed by President George W. Bush, ruled that Alabama’s same-sex marriage ban violated the Equal Protection and Due Process clauses of the 14th Amendment. And she dispensed with the absurd notion that rearing children in a same-sex marriage would loosen the bonds that tie biological parents to their offspring.
“. .. Alabama does not exclude from marriage any other couples who are either unwilling or unable to biologically procreate. There is no law prohibiting infertile couples, elderly couples, or couples who do not wish to procreate from marrying. . .In sum, the laws in question are an irrational way of promoting biological relationships in Alabama,” she wrote.
Still, the bigots continue their battle, hoping to bend the arc of history back toward the 19th century as the nation waits for the U.S. Supreme Court to issue a definitive ruling later this year. Alabama’s Attorney General is appealing Judge Granade’s ruling. And Alabama’s famously combative Supreme Court Chief Justice, Roy Moore, has promised to ignore the judge’s decision.
Further, those antediluvian voices have been echoed on the national stage by some Republicans considering a run for the presidency. U.S. Senator Ted Cruz (R-Texas) and Louisiana Gov. Bobby Jindal have suggested a Constitutional amendment banning gay marriage.
But that view is rapidly dwindling — close to obsolete outside the aging GOP base. Nearly 60 percent of Americans now support same-sex nuptials, according to a recent Washington Post/ABC News poll. No matter what the Supreme Court rules, gay marriage will prevail in the not-too-distant future.
That’s why Todd is optimistic — even as she pushes back against the prejudices of some of her colleagues. “The reality is we’re going to win this battle,” she said.