Yes, vaccines should be mandatory

Yes, vaccines should be mandatory 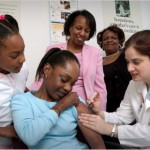 My parents didn’t fear vaccines. They feared the diseases — whooping cough, measles and polio, among them — that vaccines were meant to prevent. They saw immunizations as a godsend.
They grew up in rural Alabama in an era when medicine had not conquered common and highly contagious diseases that sickened, maimed and sometimes killed. Children and adults were stricken and entire communities assaulted by those plagues.
“I remember a polio scare when churches postponed their revival meetings” for fear that a large gathering might spread the disease, my mother told me. Then there was the time Mom got sick from eating too many fresh but not-quite-ripe plums from a tree in the woods. My grandmother panicked because she thought my mother had contracted polio, Mom remembered.
She didn’t get polio, but she did get the measles. “It was the sickest I’ve ever been. I was burning up with fever,” she recalled.
But our success in fighting those dread diseases has bred complacency. The Internet has fostered ignorance. Junk science has overtaken reason. As a result, parents who ought to know better have refused to immunize their children, and measles, declared eradicated from the U. S.
in 2000, is resurgent. Whooping cough is also rebounding.
Humans are odd creatures, and our ability to calculate risks is not one of our strong suits. Remember the Ebola scare, which produced a peculiar contagion: the “freak-outs”? Republicans raged against President Obama; members of Congress wanted to bar West Africans from the country; travelers refused to go to Dallas, Texas, which had experienced exactly one Ebola death.
Measles is far more contagious than Ebola. Measles is airborne; the virus can hang in the air for a couple of hours, so the vulnerable can contract it merely by entering a room where an infected person has been, infectious disease experts say. Worldwide, Ebola has caused about 9,000 deaths so far. Measles, meanwhile, caused about 145,700 deaths worldwide — yes, deaths — in 2013, according to the World Health Organization.
So why doesn’t every American parent get his or her children vaccinated? The vaccine is between 95 and 99 percent effective.
Once upon a time, the science-deniers were mostly limited to the paranoid fringe of the ultra-right — the John Birch types who fought fluoridation of water in the 1950s. It’s still true that Republicans, especially the libertarians among them, are more likely to believe the decision to vaccinate should be voluntary, not mandated by government. About one-third of Republican voters hold that view, according to a recent poll by the Pew Center.
But the rightwing skeptics have found unlikely allies on the far left, where “crunchy moms” denounce gluten, swear by cloth diapers and insist that immunizations would do more harm than good. While most Democrats — 81 percent, according to Pew — believe government should require immunizations, ultra-liberal precincts have a high percentage of parents who have opted out of vaccines. Marin County, Calif., for example, had an opt-out rate that was four times the national average in 2012, according to researchers.
Still, the biggest divide on vaccinations isn’t political; rather, it’s generational. The younger you are, the more likely you are to believe that government should not require immunizations for children. Overall, 68 percent of Americans believe that vaccines should be mandated; eighty percent of people over 65 hold that view, according to Pew. But that drops to just 41 percent among adults 18-to-29 years old.
They haven’t seen what my mother’s generation saw. They’ve not lived with the fear of contagion. They haven’t seen a baby go blind or even die from measles. They’ve never seen a small child wracked by pertussis, which can cause a cough so violent the victim may vomit or faint.
Their ignorance affects us all, so we can’t afford the costs of allowing them to learn those lessons the hard way. If they want to live in a civilized society, they must be required — with very, very few exceptions — to vaccinate their kids.