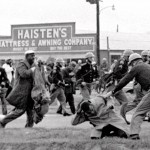 Historians refer to that day fifty years ago as “Bloody Sunday” because of the indelible images of brave men and women beaten to their knees — some knocked unconscious — as they tried to march across the Edmund Pettus Bridge. It hardly seems possible, now, that they were attacked so viciously for something that seems so ordinary: the right to vote.
In fact, universal suffrage isn’t ordinary or mundane or inconsequential. It’s a radical notion, still rejected in much of the world. And the legacy of those marches in Selma, Alabama proves that the opponents of black voting rights were right about at least this much: if they allowed black citizens to vote, the nation would be changed.
The most obvious symbol of that powerful tide of progress, President Barack Obama, occupies the Oval Office. But the inheritance that those marchers bequeathed to the nation is evident in so many other subtle and not-so-subtle changes in our political and civic life. If the election of a black governor or U.S. Senator, for example, is still unusual, it’s no longer historic. Nor is the elevation of a black Secretary of State or Attorney General.
But that progress has not pleased all Americans. Some long for the past, for an old order in which certain people controlled all the levers of political power, where only those who looked and spoke a certain way were allowed to hold political office, where many citizens were excluded from a government allegedly by and for them. That helps to explain why reactionary forces have spent the last 15 or so years snipping at the universal franchise, cutting away at the edges of the right to vote.
Conservative Republicans label their campaign — which centers around strict voter ID laws — “voter integrity, ” as if it’s a righteous project designed to uplift democracy. It’s just the opposite: It’s designed to block the ballot for a few voters, mostly poor and black, who are inclined to support Democrats. In close elections, a few votes can decide the outcome.
To be sure, no voters get their heads bashed in. No state troopers or sheriff’s deputies wait with billy clubs to attack those who dare exercise their constitutional rights. No would-be voters are asked to number the bubbles in a bar of soap in order to register.
Still, the voting restrictions that have been passed over the last several years are just an updated version of the poll tax. Make no mistake about it: the universal franchise is under assault.
Just take a look at the U.S. Supreme Court’s astonishing ruling in 2013, which gutted a significant portion of the 1965 Voting Rights Act— the key federal legislation prompted by the Selma marches. An ultra-conservative majority did a most un-conservative thing: it tossed out a law overwhelmingly passed by Congress, declaring, in effect, that the legislative branch was wrong.
The Supreme Court had earlier endorsed voter ID laws, ruling in 2006 that an Indiana requirement for photo identification at the polls was in keeping with the state’s “legitimate interest” in protecting against voter fraud. But the fraud such laws are intended to prevent — in-person voter impersonation — is as rare as the northern white rhino. It’s pretty clear that blocking the ballot is the aim here, as Republican factotums have occasionally, if inadvertently, admitted.
In reality, they don’t want certain voters to have the ballot because it has the potential to upend the old order. Think about it: If the black citizens of Ferguson, Mo., which is 67 percent black, start to religiously exercise their right to vote, they can change the town’s leadership — and change a police department and court system which are shot through with racial bias, according to a report from the U.S. Department of Justice.
There is power in the franchise, which is why its expansion has met resistance throughout American history. Courageous patriots have given their lives to secure the ballot for every citizen.
But the struggle is not over.