Bigotry based on the Bible

Bigotry based on the Bible 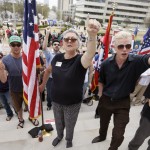 There is nothing new about bigotry based on the Bible. I grew up under its lash.
During the tumultuous days of the civil rights movement, white Southern preachers took to their pulpits to defend Jim Crow and its odious mistreatment of black citizens. They believed that God was on their side.
So it comes as no surprise to hear very similar arguments made by those who claim their Christianity — their piety — requires them to discriminate against gays and lesbians. That’s the specious defense for measures that were hastily passed in Indiana and Arkansas recently and are under consideration in several other states.
Those laws — each billed as a “Religious Freedom Restoration Act” — are nothing but a thinly veiled attempt to use Holy
Scripture as a shield for prejudice, the Old and New Testaments as a buttress for injustice.
Proponents of those laws argue that religious freedom is one of America’s crowning achievements, one that the Founding Fathers saw as an essential component of their new democracy. They’re right. But in our pluralistic society, we’ve always found the need to balance the religious beliefs of some against the rights of others.
Besides, there is absolutely no Scripture that admonishes conservative Christians to refuse to bake a wedding cake for same-sex nuptials. It’s simply not there.
And the refusal to do so should not be protected by law. That’s what many opponents of those Religious Freedom Restoration Acts fear they were intended to do — provide a cover for bigotry.
(By contrast, no cleric should ever be forced to perform same-sex nuptials. The Constitution protects the right of churches to marry whom they please, as demonstrated by Catholic priests, who frequently refuse to marry those who are divorced. That’s a valid extension of religious liberty. Profit-making businesses, however, are not religious institutions.)
We’ve already been there in our history. While bigotry against black Americans and discrimination against gays and lesbians are not precisely the same, there are several parallels. One is the tendency of ultra-conservative Christians to mask their contempt as morality.
During the days of slavery and the ensuing Civil War, white preachers used the Bible to prop up their bigotry. The Rev. Richard Fuller, Harvard-educated and a leading theologian of his day, was co-author of Domestic Slavery Considered as a Scriptural Institution.” In it, he argued: “The Old Testament did sanction slavery. God said, ‘Both thy bondsmen and thy bondmaids, which thou shalt have, shall be of the heathen that are round about you. . and ye shall take them as an inheritance for your children. . .”
A few years earlier, Fuller had helped to lead Southern Baptists in a split from their northern brethren over slavery. The Southern Baptist Convention broke away because its northern members opposed the repulsive institution. (In 1995, the Southern Baptist Convention finally got around to apologizing for that.)
Well into the 1970s, many white churches held fast against the idea of integration, believing that God decreed that each race should live separately. On the rare occasion that a southern white minister tried to lead his congregation to accept the brotherhood of all human beings, he was quickly sent packing.
In the mid-1960s, former President Jimmy Carter’s Plains, Ga. church was among those that opposed attendance by black Christians, according to Stephen Hayward, author of “The Real Jimmy Carter.” “In 1965, when Carter was a state senator, his church. . . decided to make an official policy of barring blacks – physically if necessary – from attending Sunday worship service,” he wrote. (Again, no law should bar that sort of behavior if churches insist on it.)
Still, it’s no wonder these so-called religious freedom bills have provoked so much controversy. Large businesses — even the hyper-conservative Wal-Mart — have condemned them as likely to lead to legally-sanctioned discrimination. As a result, some conservatives — including GOP leaders in Indiana and Arkansas Gov. Asa Hutchinson — have rapidly backed away from their previous support of the measures. Indeed, Republicans in the Indiana Legislature have added language to explicit bar discrimination.
It’s too bad they didn’t do that originally. All they managed to do was give the principle of religious freedom a bad name.