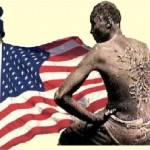 The Confederate markers continue to tumble — flags, statues, monuments. After Dylann Roof associated his alleged atrocity with the Confederacy, politicians fell over themselves getting away from its symbols.
While a few supporters of the Old Dixie are resolute, most leading public figures want nothing to do with commemorations of the Lost Cause. Indeed, once NASCAR declared that the St. Andrew’s cross and stars was not a fit emblem for its franchise — where that flag has been always been revered — the earth shook.
So after decades of protests over the Rebel flag and other Confederate insignia, which enjoyed prominent display in public spaces for much too long, that battle appears over. Progressives won in a rout.
But the war has only just begun. America has yet to come to terms with its original sin: slavery. Until we do, the removal of flags and statues remains a small gesture, a harbinger of a reckoning not yet come. Some 239 years after that awe-inspiring Declaration of Independence — “We hold these truths to be self-evident, that all men are created equal” — we are still in denial about the foundations upon which this republic was built.
Most high school graduates can probably recite the bare outlines of the infamous Three-Fifths Compromise that allowed the delegates to the Constitutional Convention to adopt a founding document. That agreement counted each enslaved human being as three-fifths of a person.
(It remains a testament to the complex nature of the human enterprise that one of the greatest thinkers on liberty, Thomas Jefferson, owned slaves. When we speak of Jeffersonian democracy, what, exactly, do we mean?)
Some high school grads may also be aware of the Dred Scott decision, rendered by the Supreme Court in 1857. It stated that even free black men had no rights that white men were bound to respect.
But here’s a fact you probably didn’t learn in your high school history classes: Much of the wealth that the United States acquired early on was built on slavery, that ignominious institution in which one human being may own — own — another. As historian Eric Foner has put it: “The growth and prosperity of the emerging society of free colonial British America…were achieved as a result of slave labor.”
That wealth was not confined to the slave-owning South, either. Although the planters certainly owed most of their money to their unpaid laborers, Northern institutions also profited. Northern banks, insurance companies and manufacturers all benefited — some more directly than others — from slave labor.
This is a great country, but it has a complicated history. The building of America was a violent, oppressive and racist undertaking, not simply a virtuous tale of brave men breaking away from the overweening British empire. The story of colonists who were tired of paying high taxes on their imported tea is a well-told anecdote, but it neither begins nor ends a rather more painful narrative.
And enslaved Africans were not the only ones who suffered. Following the practices established by the European conquerors, the new government stole the best land from the native Americans, consigning them to arid and isolated corners of the country when it did not kill them outright.
Yet, our mythology and folklore acknowledge very little of that. That’s not in the stories we tell, the songs we sing, the poems we recite. It’s not only that history classes are haphazard and superficial but also that our common tales are woven from misrepresentations, if not outright lies. Land of the free? Not at first.
Truth be told, history is a hard sell in these United States, no matter how it’s presented. We’re a moving-on people, hustling forward, closing the books, looking ahead. That has helped us in so many ways. Unlike, say, the Sunnis and Shi’a in the Middle East, we don’t consume ourselves with arguments more than a millennium in the making.
Yet, our failure to acknowledge a turbulent and cruel history is a hindrance, a barrier to a richer future. We can continue to perfect our union only through a full accounting of the past.