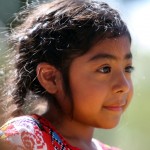 In a more generous political climate, an adorable little girl who gave a letter and a hug to Pope Francis could make a difference. In an era with a more pragmatic Congress and a less balkanized electorate, five-year-old Sophie Cruz could break through the gridlock around immigration reform.
But we are living through a deeply-polarized era in which compromise is a dirty word, listening to those with whom we disagree is seen as weakness and respect for different opinions regarded as betrayal. Pope Francis’ gracious address to Congress, in which he urged compassion toward “foreigners,” won’t change that. Neither will a cute little girl.
The pope’s embrace of young Sophie has flashed around the world, carried by the supersonic speed of social media. As he made his way down the National Mall in the Popemobile last Wednesday, he spotted her trying to break through his firewall of security guards and beckoned for her.
She handed him a letter — accompanied by a delightful drawing of the pope with children of different races — pleading for a comprehensive immigration reform that might save her parents from deportation. Though she is a citizen (so far, at least, since Donald Trump has not yet had his way on birthright citizenship), her parents crossed the border from Mexico illegally.
Her well-written letter and her flawless recitation of it for reporters were no accident. She and her parents, who live in Los Angeles, went to Washington with a group of immigration activists. They apparently chose Sophie as likely to get the pope’s attention because of his well-known affection for children.
Their strategy harkens back to the days of the civil rights movement, when activists scoured the landscape for well-scrubbed and presentable symbols to show to the nation. That’s quite understandable. When an oppressed group has the opportunity to present itself on a grand stage, its leaders seek to make a good impression. And that in no way diminishes Sophie’s charm.
She gave moving testimony to the anxiety and insecurity created by the threat of deportation, writing to the Pope: “I would like to ask you to speak with the president and the Congress in (sic) legalizing my parents because every day I am scared that one day they will take them away from me.”
But those voters who are willing to be persuaded by the hopes and dreams of eleven million undocumented immigrants already support changing the law. According to a recent CBS poll, 58 percent believe they should be given citizenship, while another 10 percent believe they should be granted legal status. That’s a substantial majority who support bringing those immigrants out of the shadows.
The Republican Party, however, has been captured by the xenophobic minority following Donald Trump, with his denunciation of Mexicans as “rapists” and “murderers” and his insistence on deportation for millions. Little Sophie won’t change their views. Neither will the powerful preaching of Pope Francis.
“In recent centuries, millions of people came to this land to pursue their dream of building a future in freedom. We, the people of this continent, are not fearful of foreigners, because most of us were once foreigners. I say this to you as the son of immigrants, knowing that so many of you are also descended from immigrants,” he told Congress.
In a different political climate, that message may have moved Speaker John Boehner, a Catholic, who teared up during the pope’s address. But he seems cowed by the nativists in his restive caucus, and he has refused, so far, to force a vote on the comprehensive immigration reform plan passed by the Senate two years ago.
Our political system is paralyzed, for now, by the fears and bigotry of a few. And little Sophie can’t change that.