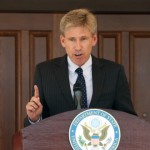 “A gaffe is when a politician tells the truth – some obvious truth he isn’t supposed to say.” — Journalist Michael Kinsley

So another Republican Congressman has come forward to admit that his party’s Benghazi obsession is little more than an undisguised effort to damage the presidential campaign of Hillary Rodham Clinton, the Democratic frontrunner.
In a radio interview last Wednesday, U.S. Rep. Richard Hanna (R-N.Y.) defended his colleague, House Majority Leader Kevin McCarthy, who had acknowledged that obvious truth as well.
“Sometimes the biggest sin you can commit in D.C. is to tell the truth. This may not be politically correct, but I think that there was a big part of this investigation that was designed to go after people and an individual, Hillary Clinton,” he said.
Well, of course. Anyone who has been paying the slightest attention already knows that the unending series of Benghazi “investigations” began as a way to embarrass the administration of President Barack Obama, including his then-Secretary of State. When Clinton announced her presidential campaign, the investigations began to center on her (and are now more focused on her use of a private email server).
If you only dimly recall the origin of the GOP battlecry “Remember Benghazi!”, it started with a tragedy. On September 11, 2012, Christopher Stevens, then U.S. ambassador to Libya, and three other Americans were killed in two separate assaults by Islamic jihadists on U.S. installations in Benghazi, Libya. Stevens was the first U.S. ambassador killed in the line of duty since 1979.
The incident deserved a thorough probe to see whether there was anything that could be done to prevent the deaths of diplomatic personnel in the future: Was security too lax? Intelligence ignored? The area too dangerous for diplomats?
But in the days after the deaths, it became clear that leading Republicans were much more interested in scoring their own attacks on Democratic targets than investigating the “Battle of Benghazi,” as it has been called. For one thing, they focused on such superficial and unimportant details as whether Susan Rice, then the president’s national security adviser, had clearly described the assault as “terrorism” or merely “extremism.” It’s a mystery what difference that makes, but that line of attack derailed any shot she had at succeeding Clinton as Secretary of State.
What that, Republicans were emboldened. And since then they haven’t given up their efforts to sink some notable Democrat with even a tenuous link to Libya and its national security implications.
Never mind that they’ve not had any luck so far. After seven Congressional and two executive-branch investigations, there has been no evidence of criminal wrongdoing, malfeasance or cover-up. The last was an exhaustive probe conducted by the GOP-led House Intelligence Committee; it found no evidence that either the U.S. military or the CIA had acted improperly. There was no delay in sending a military rescue team, as many conservatives have insisted.
So there was no genuine surprise at what McCarthy told Fox News in a September interview:
“Everybody thought Hillary Clinton was unbeatable, right? But we put together a Benghazi special committee, a select committee. What are her numbers today? Her numbers are dropping. . .,” McCarthy told Sean Hannity.
Still, he paid dearly for the slip. Criticized by Republican leaders for dropping the gauzy veil over their nakedly partisan smear campaign, he was forced to abandon his plan to succeed John Boehner as Speaker of the House.
McCarthy was supposed to keep up the pretense that the House Select Committee on Benghazi is conducting a high-minded probe free of partisan tilt. And that pretense continues. Clinton will appear before the committee later this month.
If there is any better example of the excessive and stultifying partisanship that has laid waste to Washington, it’s hard to know what that may be. After all, it can hardly be considered shocking that an American diplomat was killed in a dangerous country full of Islamic militants. Tragic, gut-wrenching, awful, yes. Shocking, no.
Still, the GOP’s listing and rudderless Benghazi ship — white whale on the horizon — sails on.