Joe Biden and the war on cancer

Joe Biden and the war on cancer 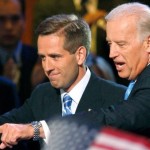 After Joe Biden’s Rose Garden announcement, news reports naturally focused on his decision not to seek the presidency. But the overarching theme of his short address was something more powerful and less political: This is a great country that ought to be more optimistic about its potential, more ambitious in its goals, more confident about its future.
That theme underlay his clarion call for a “moonshot” to cure cancer. As he noted — “It’s personal,” he said — Biden’s grief over the untimely death of his son, Beau, fueled his sense of urgency. The younger Biden, Delaware’s Attorney General, died in May, at the age of 46, after a long battle with brain cancer.
Still, the vice-president struck a cord too long missing from our public debates, too little heard in our partisan warfare: we have the ability to accomplish great things when we summon the will to do so.
“I know we can do this. The president and I have already been working hard on increasing funding for research and development, because there are so many breakthroughs just on the horizon in science and medicine, the things that are just about to happen.
“And we can make them real with an absolute national commitment to end cancer, as we know it today. . .If I could be anything, I would have wanted to have been the president that ended cancer, because it’s possible.”
Whatever happened to that feisty spirit in our civic life? Whatever became of our sense of never-ending achievement, of unbridled national ambition, of great national purpose? Why don’t we reach for the stars anymore?
Instead, we’ve become brittle, limited in our expectations, dour in our outlook, afraid that the nation’s best days have already passed. While the lingering affects of the Great Recession, as well as the global threat of terrorism, have undoubtedly worked to dampen our optimism, history teaches that we’ve faced down more daunting odds before.
Indeed, the long-running Cold War, when the Soviet Union represented an existential threat to the United States, inspired the great space race that led to Neil Armstrong’s walk on the moon. The United States poured money into the sciences, down to the high school level. That period of bountiful scientific research benefitted not only NASA but also countless other streams of inquiry — including the pioneering communications work that led to the Internet.
Since the 1970s, though, Congress has slowly drained away money from the sciences, a process that has sped up over the last few years. With their current obsession on cutting federal government spending, GOP budget cutters have hacked away at everything from medical research to space exploration.
Nowadays, Congress can’t even agree to fund things that we know work. While all reasonable people agree that the country needs to repair and rebuild its aging infrastructure — bridges, highways, dams — Congress cannot manage to set aside the funds that are necessary.
During his first presidential campaign, President Obama called for a massive re-vamping of the nation’s electric grid, a plan to put in place the energy infrastructure for the 21st century. But that’s rarely even discussed anymore.
Instead, a small minority of vociferous partisans holds up routine legislation, such as raising the debt ceiling to pay the bills we’ve already incurred. That’s how a great nation behaves?
It’s not clear that even a massive infusion of research dollars — a “moonshot,” as Biden called it — would lead to a “cure” for cancer. Scientists would likely even debate the use of the phrase, since cancer is not a single disease but rather a group of diseases that share the phenomenon of abnormal cell growth.
Still, Biden’s call for pouring national resources into the search for better treatment options makes sense. When President Kennedy said, “We choose to go to the moon!”, our scientists weren’t certain we could do that either. But they dared to dream big breams.
Why don’t we do that anymore?