The puzzling popularity of Ben Carson

The puzzling popularity of Ben Carson 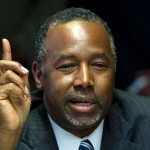 To read Ben Carson’s memoir — “Gifted Hands: The Ben Carson Story” — is to enjoy an uplifting and inspiring tale of a man who overcame a traumatic childhood to become one of the nation’s leading neurosurgeons. That man is certainly worthy of widespread admiration.
But who is the guy taking his place on the campaign trail? Who is the man bashing Muslims, denouncing gays and dismissing science? Who is the candidate engaging in all sorts of weird conspiracy theories? That Ben Carson deserves nothing but contempt.
Yet, the good doctor remains a leading Republican presidential candidate, either besting Donald Trump for the top spot, according to several polls, or coming in a close second. While he and Trump have managed to befuddle most professional prognosticators with their dominance of the Republican field, a new survey shows Carson has pulled off another equally surprising feat: he’s well-liked by Democrats and Republicans alike.
Indeed, according to Gallup, Carson is among the most popular of the presidential candidates of either party. Among all voters, regardless of partisan affiliation, he’s viewed favorably by 42 percent. Among Republicans, 67 percent have a favorable view, while a mere eight percent dislike him.
That high esteem is certainly understandable for Dr. Carson, the surgeon, who embodies the quintessential American story of the self-made man. Through grit, hard work and a deep-seated religious faith, he overcame poverty and teen-aged recklessness to graduate from Yale and the University of Michigan Medical School. (His tale is compelling despite his exaggerations about gaining acceptance to West Point.)
After a fellowship at Johns Hopkins Hospital, one of the nation’s most prestigious medical facilities, he joined the faculty there, rising to become director of pediatric neurosurgery. His memoir was turned into a TV movie starring Cuba Gooding Jr., and the millions of viewers who’ve seen it probably count among his many admirers.
Besides that, if you’ve watched any of the GOP presidential debates, Carson’s low-key demeanor compares favorably to the boisterous braggadocio of the Donald, whose every sentence struggles under the weight of first-person pronouns and whose every pronouncement is a heroic tale of his own achievements and talents. If you’re watching the neurosurgeon next to the reality TV star/real estate mogul, you certainly come away with a more favorable impression of the former.
Still, candidate Carson holds some distressing views. He has declared that he doesn’t think it would be appropriate for a Muslim to hold the presidency of the United States — a bias that directly contradicts the U.S. Constitution, which explicitly states that there shall be no religious test for political office. He opposes same-sex marriage and has dismissed homosexuality as “a choice.” (For the record, he also disputes broad areas of scientific consensus, including evolution, global warming and archeologists’ views of Egyptian pyramids.)
The good doctor is also given to outrageous rhetoric, comparing Obamacare to slavery, for example. In a recent interview, he claimed that limiting firearms in the U.S. could lead to the rise of a government like that of Nazi Germany. And, despite holding himself out as a model of moral rectitude, he has been deliberately misleading about parts of his personal history.
Given Carson’s worldview, it’s perhaps folly to try to find, among his beliefs, those that are most outside the mainstream. But a leading candidate for that dubious distinction is Carson’s fixation with a John Birch-type figure named W. Cleon Skousen, who has been described by the conservative National Review as a “nutjob.” Carson frequently quotes works by the late Skousen, who wanted to repeal the minimum wage, outlaw unions, eliminate anti-discrimination laws and repeal the income tax.
Leave aside, for a moment, the fact that Carson knows next to nothing about how the government actually works. Shouldn’t a candidate for president, especially one who is so widely admired, at least be comfortable with the social and civic mores of the late 20th century — if not the 21st?
Count me among those who are skeptical that Carson’s stock will remain high throughout the primary season. By the time he’s done with his candidacy, his poll numbers won’t be the only thing in decline. It’s likely his broad appeal will have evaporated, as well.