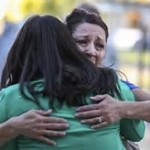 Did Syed Farook and his wife, Tashfeen Malik, suspects in the San Bernadino massacre, just hand the GOP nomination to Donald Trump? Will his poll numbers soar into the stratosphere now that Muslims who pledged allegiance to the self-proclaimed Islamic State have been identified as the shooters who killed 14 people and wounded countless others?
Even before Trump came along with propane tanks of bigoted rhetoric, Islamophobia had been burning through the cultural landscape. He and rival Ben Carson poured on fuel, with Carson declaring that no Muslim should be eligible for the presidency and Trump swearing — wrongly — that throngs of American Muslims rejoiced in the aftermath of the 9/11 atrocities.
After last month’s terror attacks in Paris, Trump’s support wafted ever higher; he now claims the allegiance of nearly 30 percent of the GOP electorate, according to a Quinnipiac University poll. And even some Democrats have endorsed the uncharitable view that Syrian refugees should be subjected to such stringent background checks that they would be virtually disqualified from asylum in this country. Farook and Malik have likely intensified that fearful response.
Still, there was in the couple’s rampage much that was peculiarly American — not foreign. Farook, indeed, was a U.S. citizen, born in Illinois. His wife had a green card, a document allowing her to live and work here legally. And the attack had many of the hallmarks of the quintessential American mass shooting.
Even though the FBI is investigating the attack as an act of terrorism, Farook and Malik were mimicking countless other American mass shooters who find some twisted glory in gunning down other citizens — strangers, passers-by, co-workers, movie-goers, school children. This is a peculiarly American phenomenon, a homegrown form of madness.
And it centers around an irrational — a completely unhinged — embrace of firearms. Using almost any definition of “mass shooting,” the United States has more than any other country. (Most researchers discount homicides that are gang-related or have robbery as a motive. They also leave out domestic violence, counting only those incidents that occur in public places.) And staging them has only grown more popular. Mother Jones magazine, which has analyzed data for the past 33 years, concludes that there were more mass shootings in the U.S. since 2005 than in the preceding 23 years combined.
According to University of Alabama criminal justice professor Adam Lankford, we account for less than 5 percent of the world’s population and 31 percent of its mass shootings. From his study of other countries, he has concluded that easy access to guns is a prominent factor, he said.
But a significant portion of the population — and of conservative political leadership — refuses, just flat out refuses, to see any link between the proliferation of firearms and the increase in mass shootings. Indeed, the gun lobby insists — and I couldn’t make this up — that the country would be safer if there were even more guns in every home, automobile, school, church, synagogue and nightclub.
The lunacy that pervades our worship of the Second Amendment — our warped reading of it, anyway — is so wildly perverse that it eclipses our fear of terrorism. Here’s what the gun lobby has insisted upon: Even if Farook had been on an official terrorist watch list, he still would have been legally permitted to purchase the semi-automatic assault-type weapons he allegedly used to gun down his victims. Yes, you read that right.
And GOP presidential candidate Carly Fiorina repeated that bit of gun-lobby gospel in the wake of the San Bernadino massacre: Even people on the terror watch list should be allowed to purchase firearms. There you have it — a tightly-woven web of crazy that logic simply cannot penetrate.
No matter what motivated Farook and Malik, easy access to high-powered firearms allowed them to kill quickly and efficiently. Indeed, that’s the common element in the epidemic of mass shootings that has shaken the country. Yet, that’s the one element we refuse to do anything about.

This has been updated to reflect new information about the links between Farook and Malik and ISIS.