The Christmas story and Syrian refugees

The Christmas story and Syrian refugees 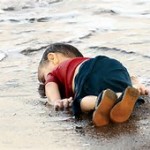 There is irony aplenty in this season, which is celebrated throughout Christendom because of the tale of a babe born in a troubled precinct in the Middle East a little more than two thousand years ago. You know the story: A couple of modest means finds no accommodations, even as the woman is on the brink of giving birth. After the child is born, they are forced to flee the depredations of a murderous king.
As history rolls on, we find the Middle East once again in upheaval, roiled by murderous tyrants who have spurred families to seek sanctuary. Given the time of year, you’d think the plight of those families would be the preoccupation of the news cycle; you’d think accommodating them would be the pre-eminent call of preachers and politicians alike. After all, the ancient tale has been said to inspire reflection, charity and generosity.
But those sentiments seem in scant supply in these United States. Instead, we are awash in suspicion, waylaid by fear and anxiety, beset by bigotry. Many of the nation’s political leaders have insisted that we bar the gates, exclude the stranger, ignore the vulnerable.
While President Obama has called on the nation to take in more refugees from Syria — where the armies of President Bashar al-Assad and the self-proclaimed Islamic State represent dire threats to life and limb — twenty-seven U.S. governors, more than half, would attempt to bar Syrian refugees from their states. New Jersey Gov. Chris Christie has famously said that he wouldn’t even take in orphans under the age of five.
Indeed, the call to keep Syrian refugees out of the United States has captured a substantial number of voters; 56 percent oppose President Obama’s policy. And that refusal finds support across party lines: Eighty-one percent of Republicans, 59 percent of independents and 31 percent of Democrats, according to an NBC News survey.
The proximate cause of that hunker-down insularity is the threat of terrorist attacks, a danger brought home by the San Bernadino atrocity earlier this month, which left 14 people dead and 22 injured. But humans are notoriously bad at assessing risks. While 45 Americans have been killed in terrorist attacks on U.S. soil since 9/11 (counting the Fort Hood shooting), far more have been killed since then in automobile accidents and non-terrorist-related gun violence.
Besides, as the brilliant novelist and essayist Marilynne Robinson has written: “Contemporary America is full of fear. (But) fear is not a Christian habit of mind. . . Those who forget God can be recognized in the fact that they make irrational responses to irrational fears. . . There are always real dangers in the world, sufficient to their day. Fearfulness obscures the distinction between real threat on one hand and on the other the terrors that beset those who see threat everywhere.”
Terror is not everywhere, and its risks would not increase if we were to admit substantially more Syrian refugees. They are subjected to a vetting process that takes up to two years. Anyway, Rizwan Farook and Tashfeen Malik, the married couple who allegedly carried out the San Bernadino attack, had no ties to Syria that authorities have detected.
Meanwhile, millions of Syrians have been displaced by war. According to the United Nations High Commissioner for Refugees, Turkey has taken in 1.9 million, while Iraq, which is still beset by armed conflict, has taken in 250,000. More than one million Syrian refugees are in Lebanon, and more than 600,000 are in Jordan.
The far wealthier European nations are still wrangling over the numbers they will accept, but German Chancellor Angela Merkel has been steadfast in her welcoming tone; her country has taken in more than 98,000 Syrians and stands ready to accept as many as 500,000 refugees, including Syrians, per year for several years.
With that in mind, President Obama’s call for the United States to take in at least 10,000 Syrian refugees over the next year seems modest. And while providing sanctuary to some of the planet’s most vulnerable populations may not promote peace on earth, it is certainly a small gesture of goodwill to all men.