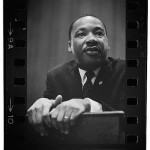 When Martin Luther King Jr. delivered his famous “Mountaintop” sermon in Memphis in 1968, he probably had not dared to dream of the astonishing racial progress that would be made after his death.
If he had lived to a ripe old age, he’d likely be heartened by the election of a black president, by the elevation of black executives in corporate boardrooms, by the inclusion of black men and women in every important sector of American life. And he might be surprised by the ways in which old racial taboos are now so easily broken — as is evidenced, for example, by the increasing number of advertisements that feature interracial couples.
Even the ongoing controversies over criminal justice would likely not dampen his optimism. Police violence against black Americans is nothing new, after all. But the Black Lives Matter movement has shown that black voters — and their white and brown allies — have a new capacity to influence systemic change. That, too, is evidence of progress.
Still, in the fear and resentment that have roiled our politics in this election season, there is something that King would find all too familiar: bigotry and backlash. Every wave of progress in this great country has seen, in its wake, currents of resistance, of anxiety, of bitterness. And racial progress, it seems, has prompted the greatest swells of indignation. What else explains the popularity of the vitriolic and bullying Donald Trump?
Commentators and political analysts, myself included, have expended reams of paper and volumes of hot air in an effort to explain the crosswinds that have buffeted the electorate — especially on the right. Trump’s bellicose rhetoric has been compared to that of George Wallace, whose run for the presidency captured the attention of disaffected working-class whites all over the country.
Certainly, Trump’s economic themes harken back to Wallace, who employed an anti-establishment populism that appealed to factory workers, truck drivers, plumbers and policemen. Wallace’s denunciations of “pointy-headed intellectuals” were legendary.
Yet, the former governor of Alabama is most remembered not for his economic appeals but rather for his racist ones. His infamous “stand in the schoolhouse door” — when he insisted that black students would never attend the University of Alabama — generated nationwide attention and guaranteed him a place in the history books. And it was that resistance to allowing black citizens full citizenship that fueled intense loyalty among his white constituents.
So it is with Trump, whose nativism and bigotry have captured many working-class whites as they are reeling from the demographic change that is in evidence everywhere, including the Oval Office. When the real estate mogul denounces Mexicans, denigrates Muslims and disparages President Obama, he isn’t using coded language — or “dog whistles.” He’s giving full-throated voice to the prejudices of those who fear the erosion of white privilege.
Yes, their economic anxieties certainly provide ample kindling for the fires of resentment. It’s no secret that the well-paying jobs that once supported a middle-class lifestyle for workers without college degrees are disappearing, as factories move offshore or replace humans with robots. Even though the unemployment rate is now at five percent, wages have stagnated.
Besides, many workers who lost their homes and savings accounts in the Great Recession are still trying to dig their way out of debt. They fear they will never make it back to a secure and comfortable middle-class existence.

Here’s the irony: King would have offered them hope rather than scapegoats. He would have pointed out that black and brown workers have suffered even more in a system that favors the few. Months before his death, King announced a “Poor People’s Campaign” that, as he envisioned it, would have united black, brown and white Americans in pursuit of a fairer economic system.
Unfortunately, even though King’s lieutenants tried to continue the campaign after his death, racial antagonisms were stronger than the pull of class unity. And that’s still the case. For all our amazing progress in race relations, too many of us still fall victim, much too easily, to the siren song of racial demagogues.
King would certainly recognize that.