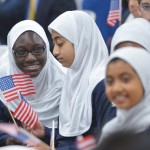 Last week, (Feb. 3), President Barack Obama made his first visit to a mosque in the United States, staging a high-profile show of support for a religious minority under siege.
In communities across the country, mosques have been vandalized, Muslims have been harassed and political leaders have questioned their patriotism. Hate crimes against Muslim Americans have tripled since the terrorist attacks in Paris and San Bernadino, according to The New York Times.
The proximate cause of this eruption of bigotry is a fear of terrorism associated with Islamic fundamentalists. But the deeper truth is that a substantial portion of the electorate is in the grips of a hateful jingoism, amplified by economic anxiety but rooted in the nation’s growing diversity.
Indeed, one of the defining features of the current Republican primary campaign is its ugly, out-front Islamophobia, led by Donald Trump. He has gone so far as to vow that Muslims would be barred from the country if he were to be (heaven help us) elected president.
Neurosurgeon Ben Carson has said that no Muslim should serve in the Oval Office. Other GOP candidates have engaged in their own Islamophobia-lite; for example, several have insisted that the U.S. admit no more Syrian refugees.
It was high time, then, for Obama to orchestrate an event in which he reminded Americans of our history, our values, our heritage. He did so last Wednesday in a passionate speech to the Islamic Society of Baltimore.
“Let me say as clearly as I can as president of the United States: you fit right here. You’re right where you belong. You’re part of America too. You’re not Muslim or American. You’re Muslim and American,” he said.
It’s about time.
Earlier in his presidency, Obama had been reluctant to publicly embrace the country’s Muslim population; he was afraid of fueling the ridiculous falsehoods about his own ancestry and religion. According to CNN/ORC poll conducted in September 2015, 29 percent of Americans — 43 percent of Republicans — believe he is a Muslim. Fifty-four percent of Trump supporters think so.
He is not. Obama is a Christian. (You will surely remember the controversy that erupted during his first presidential campaign over his then-pastor, the Rev. Jeremiah Wright, who was ordained in the United Church of Christ. Many of the same voters who vociferously criticized Obama over his association with Wright back then now insist, oddly, that he’s a Muslim.)
The fabrications and conspiracies notwithstanding, the final year of his presidency has brought Obama a freedom from political caution. Moreover, he may have finally understood that he cannot persuade his vehement rightwing critics to be rational. They will always oppose him, doubt him, mistrust him.
To underscore that, GOP presidential candidates Donald Trump and Marco Rubio jumped immediately to criticize Obama’s appearance at the mosque. Trump coyly fanned the flames of birtherism, while Rubio insisted that Obama is “always pitting people against each other.” (Huh?)
Here’s the more important point, though: There would be absolutely nothing un-American or foreign or subversive if Obama were Muslim. This is a nation that has religious pluralism in its DNA. While the Tea Partiers who so frequently quote the U.S. Constitution are curiously quiet on this precept, the founding document explicitly states that “no religious test shall ever be required as a qualification to any office . . . under the United States.”
In 1797, the U.S. Senate unanimously ratified the Treaty of Tripoli, which says, among other things, that “the Government of the United States of America is not, in any sense, founded on the Christian religion.” As Obama noted in his speech, Thomas Jefferson — calling Muslims “Mahometans,” as they were frequently referred to in his day — wrote that his Virginia Statute for Religious Freedom was meant to protect “the Jew and the Gentile, the Christian and the Mahometan.”
Those who pledge to protect our nation and preserve its values ought to take that more seriously.