Hypocrisy of the Christian right

Hypocrisy of the Christian right 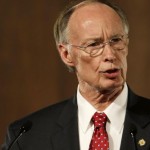 In the waning days of March, a scandal engulfed the Alabama State Capitol as Gov. Robert Bentley fired his top cop, who then turned around and accused the governor of having had an extramarital affair. The controversy engines hit high gear with the release of a salacious audio tape, in which the governor is overheard telling his listener how much he loves her and enjoys touching her breasts.
For all the inevitable handwringing and headlines, though, the accusations of Bentley’s romantic dalliance with a staffer — long-rumored in Alabama political circles and seemingly confirmed when his wife of 50 years filed for divorce in 2015 — are unlikely to inflict long-term damage to his political standing. Nothing to see here, folks.
Except this: The disgrace of Bentley — a church-going, Bible-thumping moralist — is just one more gaping hole in the mantle of sanctimony that has afforded the Christian right a special place in American politics for the last 40 years. Though you will still occasionally hear rhetoric from the campaign trial that purports to espouse Christian values, fundamentalist Christianity — at least, as a potent voting bloc — is pretty much a spent force in GOP politics.
If you have any doubt about that, just survey the current GOP presidential field, which is led by the narcissistic, non-Scriptural, thrice-married hedonist Donald Trump. Ted Cruz bet his presidential run on his bona-fides as a true believer in the fundamentalist strain of Christianity, which emphasizes church attendance, public prayer and a narrow-minded moral code (at least for public consumption). But in primary contests so far, Trump has at least held his own with conservative church-goers.
That’s the only thing about Trump’s baffling rise that prompts me to say a couple of hallelujahs. I don’t mourn the passing of fundamentalist Christianity as a commanding force; its adherents have done little to advance moral or ethical values.
With a precious few exceptions, they don’t promote social justice or work to eliminate poverty or campaign for compassion toward the “stranger”— immigrants. Instead, they have tried to impose their mean and rigid religious beliefs on public policy, misinterpreting the U.S. Constitution and misunderstanding the civic underpinnings of a pluralistic democracy.
Their enthusiasm for Trump underscores what has always been true about that group: They have strong nationalist and authoritarian impulses; they’re xenophobes; they’re averse to social change. There is also, among some white fundamentalist Christians, a strong whiff of racism.
It helps to remember the early days of the late Jerry Falwell, who founded the Moral Majority in 1979 and arranged a marriage of convenience with the Republican Party. As pastor of the Thomas Road Baptist Church in Lynchburg, Va., he railed against the 1954 Supreme Court decision that de-segregated public schools and denounced the Rev. Martin Luther King Jr. as a “Communist subversive.”
Falwell abandoned that rhetoric after he became a nationally prominent figure, but he didn’t abandon his right-wing views on race. His foray into national politics began when the federal government moved to revoke the tax-exempt status of the white-only private schools — “seg academies” — that sprang up in the wake of public school desegration. Falwell had started his own seg academy in Virginia.
Given the animating passions of Falwell’s followers, it’s no surprise that so many conservative Christians have made a seamless transition to Trump. They had already shown themselves to be flexible on their principles, so long as their politicians continued to support the policies that were really important to them. Those include contempt for the poor, suspicion of Muslims and a nationalist rhetoric that insists on dominance on the world stage.
Bentley has hewed closely enough to that line to make it unlikely he’ll pay any long-term price for his alleged affair. (For the record, Bentley has stated, unconvincingly, that he has not had any “physical” relationship with the staffer.)
For example, the governor supported the state’s extremely harsh law aimed at illegal workers, even though it originally included a provision (since struck down by a federal court) making it a crime to “transport” an undocumented immigrant. Some critics pointed out that could punish a good Christian who offered an immigrant a ride to church.
Neither Bentley nor his supporters minded a bit.