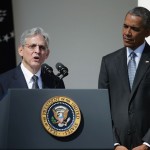 Apparently, President Barack Obama still believes that Congressional Republicans can be shamed. Apparently, he thinks he can persuade GOP Senators to consider his Supreme Court nominee with an implicit threat to expose them as hypocrites, obstructionists and revanchists if they refuse.
Has Obama learned nothing over the past eight years? The GOP Congress is shameless.
Although Majority Leader Mitch McConnell made it clear within hours of the death of Justice Antonin Scalia that he would refuse to consider — no hearings, much less a vote — any nominee Obama proposes, the president went ahead and performed the duties assigned to him by the U.S. Constitution: He selected a worthy nominee to fill the vacancy.
And not just a worthy nominee but also one whose credentials, in a rational political world, would draw broad bi-partisan support. That nominee is Judge Merrick Garland.
Chosen for a seat on the D.C. Court of Appeals by President Bill Clinton in 1995, Garland is a centrist who is highly-regarded throughout Washington. He’s a former prosecutor; as a Justice Department lawyer, he oversaw the trial team who prosecuted Oklahoma City bomber Timothy McVeigh and his accomplice, Terry Nichols. In his 1997 confirmation, he received 32 Republican votes, seven from senators still serving.
Allow me to make a prediction: None of that matters. McConnell will still refuse to hold hearings on Garland’s nomination, no matter how much his party’s hypocrisy is held up to public view. According to a recent Washington Post-ABC News poll, 63 percent of Americans believe the Senate should at least hold hearings on Obama’s nominee.
So what? Garland and Obama had barely left the Rose Garden, where the announcement was held, when McConnell reiterated his pledge to stonewall. “The next justice could fundamentally alter the direction of the Supreme Court and have a profound impact on our country,” he said, “so of course the American people should have a say in the court’s direction.”
I have news for the Senate Majority Leader. The American people had their say in 2012, when they re-elected Obama with 51 percent of the vote, five million more votes than Mitt Romney received. And Obama is still the president. There is nothing in the nation’s founding document that suggests the chief executive should forfeit his duties during his final year.
Count me among those who wish that Obama had nominated a black woman, a first for the nation’s highest court. Not only would GOP obstruction in the face of a highly-qualified black female jurist have likely motivated an enthusiastic turnout among Democratic voters in the fall, but it would also be an important symbol in a diverse country. Black women are a crucial part of the progressive coalition, and there are plenty among that cohort who would be excellent choices, including Attorney General Loretta Lynch and U.S. District Court Judge Ketanji Brown Jackson.
Of course, such a nominee would likely have given up any chance to actually serve on the Supreme Court, since Republicans would have taken the next several months to mount a smear campaign against her. That would have made her toxic, even if Obama’s successor is a Democrat.
The same applies to Garland, who has agreed to take one for the team. He’s smart enough to know the political calculus: Obama picked him to force Republicans to defend their indefensible position.
Already, conservative groups are gearing up to spend millions to make sure no weak-kneed Republicans fall out of lockstep with the marching orders from on high. (If you’re sick of seeing millions spent secretly to dominate the political process, by the way, you should pay attention to the Supreme Court. The Citizens United case, which allows corporations to spend freely on elections, was brought to you by a high court dominated by conservatives.)
If nothing else, this ought to bring to an end the attempts by some Washington observers to pin the blame for the reckless partisanship that threatens to swamp the ship of state equally on Democrats and Republicans, on Obama and his GOP antagonists. That’s just nonsense.
It ought to be clear by now that the GOP’s one remaining principle is to oppose Obama at every turn — and utterly without shame.