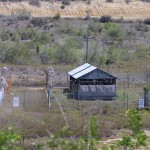 In his first presidential campaign, President Barack Obama pledged to close the infamous U.S. prison at Guantanamo Bay, Cuba, where torture has been practiced and due process flouted. The reviled facility is a stain on our reputation as a beacon for human rights and as a role model in a world where the innate dignity of the individual is still not universally accepted.
With his pledge to shut it down, Obama was merely building on the stated desire of his predecessor, George W. Bush, who knew the facility was a source of embarrassment for our allies and a recruiting tool for our enemies. Back then, Obama’s view was shared by his rival, GOP presidential nominee John McCain, who also pledged to close the prison.
But, as president, Obama badly bungled the process, failing to make closing Guantanamo a priority and misjudging the inflammatory politics that are associated with the suspects who are held there. He was deserted not only by McCain but also by Democrats who claimed — speciously — that bringing suspected terrorists into the continental United States was much too dangerous to consider.
In the final year of his presidency, Obama has returned to the incendiary politics of Guantanamo Bay, promising, again, to shutter the prison. He has less chance of success now than he did when he began eight years ago. Since then, Congressional Republicans have grown more rabid in their opposition (to everything), the GOP electorate has sunk into a miasma of xenophobia, and the terrorists of the so-called Islamic State have risen up to haunt our nightmares. Congress has passed laws making it virtually impossible to transfer Guantanamo detainees to prisons in the United States.
Still, Obama is right to bring the facility, once again, to the top of the national agenda. He has little leverage but his bully pulpit, little authority but the moral force of this righteous crusade. That’s a start.
From the beginning, the detention facility at Guantanamo Bay has represented the worst instincts of American leaders. In 2002, placing the first of nearly 800 terror suspects eventually held there, the Bush administration argued they were not subject to the protections of the Geneva Convention.
While the U.S. Supreme Court later disagreed, forcing the Bush administration to reverse itself, that arrogant and shortsighted abrogation of international norms gave our enemies good reason to call us hypocrites. And that was just the beginning of an appalling slide into a catalog of human rights abuses: some prisoners were tortured; some were held for years without formal charges; many were not, as the Bush administration initially claimed, captured on the battlefield but rather turned over by Pakistanis and Afghans in exchange for money. Those men may never have raised arms against the United States or its allies.
Even the Bush administration eventually yielded to pressure and released or transferred more than 500 detainees. Obama has continued to reduce the population; an estimated 91 detainees remain.
But the very existence of the facility — “Gitmo, as it’s often called — remains a blight on our reputation, a pall over the shining city on a hill. “Keeping this facility open is contrary to our values,” Obama said last Tuesday. (Feb 23) . “It undermines our standing in the world. It is viewed as a stain on our broader record of upholding the highest standards of (the) rule of law.”
He clearly means to use the last year of his tenure to keep pressure on Congress to close it, probably by speeding up the exodus of detainees. (While a handful of former detainees have returned to the battlefield, the vast majority of them have not.) He believes he can persuade other countries to accept an additional 80 or so, leaving only a few hardcore cases, men who are deemed too dangerous to release.
However, the cost of keeping them at Guantanamo would be exorbitant, as much as $10 million per detainee per year, according to some estimates. For a Congress that claims to be fiscally prudent, it ought to make a lot more sense to bring those men to a maximum-security prison in the United States, where they’d have no chance of escape.
That would keep us safe without destroying our ideals.