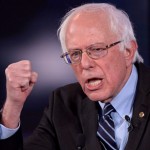 Bernie Sanders is facing a critical test of his leadership, and, so far, he’s failing. When some of his supporters threw chairs at a mid-May convention of the Nevada State Democratic Party and threatened the life of Roberta Lange, the state party chairwoman, Sanders’ response was to paint the Democratic establishment — the leaders of the party with which he has had a marriage of convenience for decades — as corrupt.
He sounded more petulant than apologetic, more angry at his Democratic rival than alarmed at the actions of his supporters. That’s troubling.
There is an old axiom, frequently quoted to younger folk facing difficulty, that says you are more accurately judged by your response to adversity than your response to advantage. There’s much truth in that — and Sanders, who is no longer young, should know it.
He is losing. He has run a lively, imaginative and uplifting campaign for the Democratic presidential nomination and has attracted millions of supporters. He has influenced Hillary Clinton, the likely nominee, pushing her to the left on some critical issues, including trade.
But, as often is the case in life, that hasn’t been enough. It’s nearly impossible for him to win. He simply cannot get enough votes in the remaining primaries.
His response? He has accused Democrats of “rigging the system” against him and implicitly threatened to withhold his support from Clinton if he doesn’t win. He has made noises about a contested convention and suggested that he doesn’t care whether his tactics aid the presumptive GOP nominee, Donald Trump.
In so doing, he simply makes the case for Clinton, who clearly is better suited, not only by experience but also by temperament, for a demanding job where you don’t always get your way. She has been just where Sanders is now: remember 2008? She didn’t threaten to turn the nominating convention upside down or insist that she’d been cheated.
Clinton ran an energetic contest against a young senator named Barack Obama — a contest that was sometimes rancorous and racially tinged. There were suggestions of a breach that would never be repaired, of a rivalry that was all-consuming, of a Democratic Party that would be riven for decades to come. But Clinton never suggested to her supporters that they stage a revolt.
And after she lost, she and her husband, former President Bill Clinton, campaigned tirelessly for Obama. She later became his loyal and dedicated Secretary of State.
(Obama, for his part, exhibited the equanimity for which he has become well known throughout the testy 2008 primary season. Though he started far behind Clinton in support from super-delegates, he persuaded many of them to change their allegiance to him without resorting to hints of blackmail. Can you imagine, by the way, what would have happened had the supporters of a black candidate thrown chairs and issued death threats?)
Sanders’ tactics, by contrast, are not only shortsighted and immature, but they are also dangerous, fueling the cynicism and suspicion that are already eating away at the civic fabric. He is leading his voters to believe that he is being cheated out of the nomination, but that is simply not true.
The party rules that hand over outsized power to unelected super-delegates, most of whom are Clinton supporters, are not democratic (small “d”), but those rules have been in place for decades. Sanders never complained about them before.
Of course, Sanders hasn’t been a Democrat before, either. He has spent most of his career as an independent, a self-described socialist. While he usually votes with Democrats in the U.S. Senate, he has often snubbed them publicly, suggesting his colleagues were too wedded to a corrupt system. That is not the sort of history likely to persuade those same colleagues — many of whom are super-delegates — to support him for the nomination.
Sanders should reconsider his strategy. He could stay in the race until June (as Clinton did in 2008) and still gracefully concede and back her candidacy. He would return to the Senate in a position of power and prestige.
But if he continues his current course, his legacy might be to elect Trump as president. Is that terrifying prospect what Sanders wants?