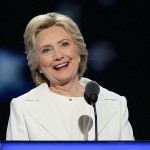 Once upon a time, Hillary Rodham Clinton was a left-wing ideologue. Or so her conservative critics argued. After all, as a young woman, she had worked in the presidential campaigns of progressive icons Eugene McCarthy and George McGovern. After law school, she had taken a job with a suspiciously left-leaning charity, the Children’s Defense Fund.
And her liberal enthusiasms didn’t stop there. As Bill Clinton’s First Lady, she was an unapologetic feminist, lending her intellectual firepower to his administration, leading the charge to enact universal health care. She was branded a fire-breathing populist, a near-socialist bent on destroying a productive sector of the American economy.
She was vilified by Republicans in Congress, rightwing radio pit bulls and health industry executives. Her health care proposal went down in flames.
Fast forward a few decades and you’ll find that she is now a corporate sell-out. Or so her liberal critics argue. She is a soul-less centrist who lacks a guiding ideology. She is a warmonger, an untrustworthy political hack.
The only thing that hasn’t changed in the several decades of her public life is this: hatred of her remains white-hot, unhinged, irrational. As Harvard scholar Henry Louis Gates observed in a widely quoted New Yorker profile written in 1996: “Like horse-racing, Hillary-hating has become one of those national pastimes that unite the elite and lumpen.”
What’s up with that? Why has Clinton inspired such rage, such resentment — fueled by very different sentiments and assessments — over the years? What has she done to earn so much antipathy?
Hillary-Hate is a strange brew, a toxic mixture of ultra-conservative rage, populist suspicion and progressive resentment over her lack of ideological purity. It is stirred together with heaping doses of the candidate’s own anti-charisma, her calculating poses, her inability to give a simple answer to a simple question. But the ingredient that has fed the mix and fueled its growth is sexism, the lingering animus toward a woman’s leadership that still festers underneath our patina of equality for all. Without the yeast of sexism, it is impossible to imagine that Clinton would be deemed nearly as untrustworthy as the lying and fraudulent Donald Trump.
As her fight for universal healthcare underscores, the conservative assault on Hillary Clinton began during her husband’s presidency. It was aided, immeasurably, by the rise of a harsh, unrelenting hyper-partisanship championed by the inimitable Newt Gingrich and echoed through a growing rightwing media network. So it was that the president and his wife were accused of drug-dealing and murder.
As special counsel Kenneth Star continued his torturous investigation of the Clintons, a besieged Hillary Clinton complained of a “vast, right-wing conspiracy” — a remark the Washington media establishment greeted as the ranting of a woman who could find no rational explanation for the political troubles of the Clinton White House. There’s no doubt the sex scandal was a problem of the president’s own making, but it’s also true that a vast rightwing conspiracy — funded by ultra-conservative one-percenters such as Charles and David Koch and Richard Mellon Scaife — was out to smear the Clintons and ruin his presidency.
But as her husband contributed to his enemies’ campaign against him, Hillary Clinton has also made mistakes that arm her rivals. Her decision to use a private email server as secretary of state was a case of superbly bad judgment; her failure to acknowledge that early in her presidential campaign is simply inexplicable. She has also disappointed liberals with her hawkishness, including her support for the worst U.S. foreign policy blunder of the last fifty years, the invasion of Iraq. That vote alone may have cost her the presidential nomination in 2008.
She suffers further because she is simply not a skillful politician. She’s smart as they come, and she has a formidable work ethic. She’s a policy wonk. But she lacks the ability to project warmth and empathy and camaraderie on the campaign trail, through no fault of her own. In her acceptance speech, she managed to convey little of her personality.
Still, her lack of charisma doesn’t explain everything. Bernie Sanders, who yelled and pointed from every podium he occupied, doesn’t exactly exude charisma. And the beloved Joe Biden, who was greeted rapturously when he took the convention stage, has been known to calculate his moves and cozy up to monied interests. So, ask yourself this: what’s different about her?