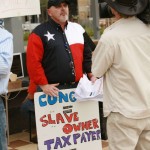 For months now, we’ve heard about an angry and anxious electorate, depressed by stagnant wages, furious about a “rigged” economic system, uncertain about the future for their children and grandchildren. That analysis supposedly explained Bernie Sanders’ surprisingly strong showing in the Democratic primaries, as well as Donald Trump’s stunning takeover of the Republican Party.
But it turns out that the economy isn’t quite as “rigged” against the hard-working middle-class as we’ve been led to believe. New economic data show some excellent news: Last year, middle-class and poor Americans enjoyed the best economic growth they’ve had in decades.
According to the Census Bureau, real median household income was $56,500 in 2015, up from $53,700 in 2014. That was the largest percentage increase recorded by the bureau since it began tracking median income statistics in the 1960s.
There was also good news for poor households: The poverty rate fell by 1.2 percentage points. While that may not seem like much, it was still the steepest decline since 1968 and represented 3.5 million fewer people in poverty.
The new economic data suggest that many of the explanations (including my own) offered for this strange election season have been, well, wrong. Allow me to turn the famous mantra of Bill Clinton’s first presidential campaign upside-down: It’s not the economy, stupid.
More than anything else, Trump’s rise is the manifestation of the anger of a significant minority of white voters over their loss of demographic and cultural hegemony. They’ve seen the new America, represented most dramatically by Barack Obama, and they’re not happy about it.
That’s not to say a stagnant economy hasn’t provided fuel for those racialist fires. It has. Some households are yet trying to climb out of the wreckage of the collapse of 2008, when pink slips were issued, savings accounts disappeared and homes were lost.
That said, the average Trump supporter isn’t faring so badly. According to FiveThirtyEight, Nate Silver’s web site, Trump’s voters are better off than most Americans. The median household income of a Trump voter in the primaries was about $72,000, based on estimates derived from exit polls and Census Bureau data. That’s higher than the median income for Hillary Clinton and Bernie Sanders supporters, which is around $61,000 for both.
The relative affluence of Trump’s supporters shouldn’t come as a great surprise. The foundation for his rise was laid by the tea partiers, who rose up in fierce resistance to President Obama immediately after he took office. They, too, were better off than the average American, polls showed. But their rhetoric was full of racial resentment and xenophobia.
Many of them were waiting restlessly for a candidate — for a flag-bearer — who would give voice to their claims to own patriotism and to being the real Americans. The tea-partiers often held aloft signs that proclaimed their desire to “take our country back.” Trump’s promise to “make America great again” is only slightly less suggestive of racial resentments.
While Hillary Clinton has apologized for characterizing half of Trump’s supporters as fitting comfortably in a “basket of deplorables,” defined by their own “racist, sexist, homophobic, xenophobic, Islamaphobic” tendencies, she wasn’t far off. Just take a look, again, at the polling data: Trump’s supporters tend to have more negative attitudes toward black Americans than the general electorate, believing us to be lazy, violent and unintelligent. Trump backers tend to have more negative views toward immigrants and Muslim Americans than the electorate as a whole.
But here’s my personal favorite: A whopping 59 percent of Trump’s voters believe the president was not born in the United States, a view that Trump has widely disseminated. That’s not a dog-whistle, that’s a full-throated battle cry of racist resentment, a way of trying to de-legitimize the first black president. The Donald belatedly backed off that claim on Friday but only after adding another lie: Hillary Clinton, he said, started the birther movement.
If this were a more conventional election season, the improving economy would have calmed the electorate and Trump would be nowhere near the finish line. Instead, he has moved uncomfortably close to Clinton, with some polls showing a dead heat.
But Trump isn’t really offering better financial prospects to a disaffected middle class. He’s offering to restore white privilege. And that thinly-veiled pledge is enough for many of his voters.