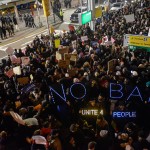 President Donald Trump will build a wall along the border with Mexico. You know that’s true because, well, he says it is.
Starting his tenure with a showman’s gifts for displays of authority and action, he signed an executive order calling for the “immediate construction of a physical wall.” Putting still more pressure on undocumented workers, he also signed an order that will make it easy for border enforcement agents to deport those who have not been convicted of any crime.
That’s in keeping with Trump’s campaign pledges, which made xenophobia an art form. He has called Mexicans criminals and “rapists;” he has vowed to deport millions; he has pledged to ban Muslims from the country.
Among his executive orders was one that banned all Syrian refugees indefinitely. (Shamefully, he also banned all refugees for 120 days.) As he told ABC News, in yet another brazen misrepresentation of the facts, “It’s going to be very hard to come in. Right now, it’s very easy to come in.”
Those sweeping actions represent not just the prejudices of Trump’s supporters — bigotry to which he proudly panders— but also, likely, his own. In a story on Trump’s lies about massive voter fraud, New York Times reporter Glenn Thrush told of a tale Trump allegedly heard from a friend and repeated to GOP Congressional leaders about people in line at a Florida polling place “who did not look as if they should be allowed to vote.” Just let that one sink in.
Indeed, Trump’s victory over Hillary Clinton was a triumph of racial resentment and fears about demographic change, a primal scream from whites who are anxious about an America that is becoming increasingly diverse. It’s no surprise that so many Trump supporters held aloft signs proclaiming their intent to take their country back.
Economic insecurity no doubt played a role in Trump’s victory; workers at the low end of the wage scale do experience keen competition from illegal laborers, who depress pay a bit, according to research. But here is a fact — a verifiable truth — that you won’t hear from President Trump: illegal immigration into this country has plummeted from its highs before the Great Recession. According to the Pew Research Center, a reliable, non-partisan institution, the number of undocumented workers has fallen every year since 2008.
That makes sense. While some, including minors from violent regions such as Guatemala, have fled war and dangerous gangs, most have come to this country seeking higher wages and more promising futures for their families. When the Great Recession hollowed out those hopes, they returned or simply stayed away.
For years now, more Mexicans without papers have gone back than have entered the United States. In other words, according to Pew, illegal immigration from Mexico is zero overall.
There’s another relevant fact that you won’t hear from Trump, who signed his executive orders with the claim that, “Beginning today, the United States of America gets back control of its borders.” In reality, President Barack Obama deported more undocumented workers than all his predecessors combined, angering the immigrant community who depended on him for protection. He sent millions home.
But facts cannot permeate the racial antagonism that propelled Trump to victory. Remember that he introduced himself on the national political stage with a five-year-long smear of Obama’s legitimacy. The premier birther, Trump claimed that Obama was a foreigner, a usurper, a puppet of terrorists. That falsehood had nothing to do with economic insecurity but everything to do with deeply-held resentment of the nation’s first black president.
That bigotry now has free rein, and it will rend the civic fabric for years to come. In addition, it tarnishes our image abroad as a beacon of diversity and tolerance. Already, it has damaged our relationship with our neighbor, Mexico.
But for all the xenophobia that Trump encourages, his supporters will be disappointed to learn that white Americans are headed, inexorably, for minority status, based on legal immigration and birth rates. Demographers say that by the year 2045, no ethnic group will account for more than 50 percent of the population.
In other words, it’s not likely that Trump will be able to make America white again.