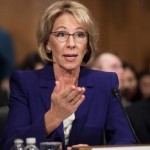 There’s a reason that Betsy DeVos’ confirmation as the new Secretary of Education was such a close vote, requiring Vice-President Mike Pence to break the tie. Even in the Trump administration, with its clear suspicion of expertise and competence, DeVos stands out as spectacularly ill-suited for her new post.
There was such a public outcry against her that two Republican senators, Alaska’s Lisa Murkowski and Maine’s Susan Collins, voted against her confirmation. In this hyper-partisan age, that’s extraordinary.
But, then, so is DeVos. And I don’t mean that as a compliment. She is a doctrinaire rightwinger who means to destroy public education, replacing it with a system of religious schools that serve the middle-class and the wealthy. Implacably hostile to the public commons, she would rip apart a core asset of our democracy.
In the early 19th century, the visionary Horace Mann set about modernizing American education, advocating a system of publicly-funded schools that served all children and answered to no sectarian or religious interests. He believed that universal education would equip disciplined citizens who would advance democratic interests. DeVos’ beliefs run counter to Mann’s principles.
Her defenders insist that all DeVos wants is to ensure an excellent education for every child and to rescue those who are stuck in failing schools. They point to her advocacy for “school choice” as proof that she would give poor parents an opportunity to send their children to high-performing schools outside their neighborhoods.
Indeed, improving educational opportunity for poor children is an important goal, one of the core civil rights issues of our era. While I disagree with those who claim that public schools are worse than they’ve ever been — actually, many of them are much better — I agree that they haven’t improved enough to equip children for the 21st century. Public schools across the board need more innovation, higher standards and more accountability for principals and teachers.
But “school choice” is a deceptive term. It encompasses support for charters, public schools which, at their best, break away from the hidebound techniques of traditional public schools to boost the achievement of even students from modest backgrounds. But DeVos’ advocacy for for-profit charter schools in Michigan (most of the nation’s charter schools are non-profit) hasn’t helped students. It has only enriched charter school operators.
The term “school choice” also encompasses vouchers, which subvert tax dollars to support private schools. In those states where vouchers have gained a toe-hold, the programs usually work by providing parents with a grant, funded by taxpayer dollars, to send their children to any school they choose.
As it turns out, though, most of them don’t serve the poorest households because the grants aren’t large enough. Vouchers average from $2,000 to $5,000. Parochial school tuition averages around $7,000 a year, while non-religious private schools tend to be much higher. Where would the poorest kids get the rest of the money?
Even if vouchers were more generous, though, they betray a fundamental principle of our pluralistic democracy: they send public dollars to fund narrow belief systems. My 2nd-grader attends an Episcopal school where she is required to attend chapel every Friday. Why should taxpayers who disagree with the beliefs of the Episcopal church subsidize my child’s education?
And why should my tax dollars support Catholic schools?
As much as I respect the current pope, Francis, I still oppose much Catholic doctrine, including the church’s condemnation of homosexuality, its refusal to elevate women to the clergy and its opposition not only to abortion but also to contraception. Why should my money support those beliefs?
DeVos, a billionaire, isn’t Catholic. She’s a member of an ultra-conservative Calvinist sect that believes in “predestination” — God has already decided who is going to Heaven before we are born — and worships private enterprise. Speaking to “The Gathering,” an annual meeting of super-wealthy conservative Christians in 2001, DeVos compared “the system of education in the country” to a biblical battlefield where Israelites fought the Philistines, according to Politico.
In other words, she means to push vouchers, which would starve public schools of desperately needed funds, to advance her rightwing religious views. Nothing is more dangerous to liberal democratic values than that.