The end of reproductive rights?

The end of reproductive rights? 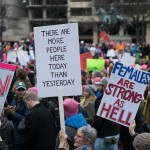 A new rightwing justice won’t change the Supreme Court. The confirmation of Neil Gorsuch — and he is quite likely to be confirmed — won’t alter its makeup. A committed ultra-conservative, Gorsuch would take the place of the late Justice Antonin Scalia, who was also a committed (and combative) ultra-conservative.
Still, President Donald Trump is likely to get the chance to change the court — and to abolish Roe v. Wade, the landmark 1973 decision that legalized reproductive rights. Justice Anthony Kennedy, the swing voter who has kept Roe alive, is 80 years old. The reliably liberal Justice Ruth Bader Ginsburg is 83 and ailing. And liberal Justice Steven Breyer is 78. Their ages alone suggest relatively short service ahead.
Even though Trump was once a libertine who proudly announced his support for reproductive freedoms, he campaigned as a social conservative who would allow his rightwing supporters, including Vice President Mike Pence, to dictate his policies on social issues. And anti-abortion forces have long clamored for the chance to reverse Roe.
Never mind that polls show most Americans would leave the law as it is. According to the Pew Research Center, 59 percent of Americans say abortion should be legal in all or most cases.
Despite that, the anti-abortion crowd has grown more dogmatic and more belligerent over the last several years. Across the country, Republican-led legislatures have already passed sharp restrictions on legal access to abortion, making it difficult in many places for women to receive the care they need. And, of course, the war on Planned Parenthood has picked up steam with Trump’s election.
That suggests that a Supreme Court moving dramatically rightward might go further than the old pre-Roe consensus, which allowed states to determine whether abortion would be legal. A Trump court could conceivably outlaw abortion altogether, which would take us into new political (and medical) terrain.
You doubt that would happen? Let’s hope you’re right. But the tides of ultra-conservative authoritarianism are rising, and those high waters will change the landscape for women, especially.
This is a war on women, a battle against the modern mores that have given women control over their bodies, authority in the board room, agency in politics and even command on the battle field. While younger women have seemed curiously complacent about the hard-won rights that have allowed women to advance, a Trump Supreme Court may galvanize a new generation of feminists.
If you’ve been persuaded that the anti-abortion crowd is merely interested in saving the lives of the unborn, consider the intellectual incoherence that has always been apparent in the anti-abortion movement. While a few brave Catholic priests and nuns stand up for poor babies, the vast majority of anti-abortion voters detest food stamps, despise Medicaid and fight housing subsidies for the poor. In other words, they oppose any and all government programs to support poor children once they are out of the womb. If they loved those babies so much, wouldn’t they want them to have decent housing and health care?
Those anti-abortion crusaders also show little enthusiasm for contraception, although broader contraceptive use is the best way to curb demand for abortions. According to the Alan Guttmacher Institute, a non-profit which advocates for reproductive health, the abortion rate in 2014 was the lowest ever in the United States. (The rate of unplanned pregnancies also fell, according to research published in The New England Journal of Medicine.) Researchers speculate that more widespread contraceptive use contributed to the decline.
That makes sense. If women are better able to plan their pregnancies, the demand for abortions would certainly drop. In Western Europe, where contraceptives are cheaper and more accessible, abortion rates are much lower than here.
But if Roe is overturned, don’t expect ultra-conservatives to stop there. Next, they will turn up the heat on birth control. They’ve already victimized Planned Parenthood, the nation’s leading provider of low-cost family planning services to poor women. They will be emboldened to go even further.
Modernity — and feminism — will eventually win out. But the battle will be long and ugly.