Trump starts down path to tyranny

Trump starts down path to tyranny 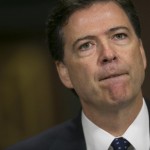 So it begins.
The nation is edging toward the constitutional crisis that many feared would erupt during the Trump administration. Our democracy is more fragile than I knew.
We are so bitterly divided, so consumed by partisanship and tribalism, that we seem willing to destroy the very thing we are fighting over: our country. Perhaps I’ve been reading too many dystopian novels lately — I’ve finished a re-read of George Orwell’s classic “1984,” I’m currently absorbed by Omar El Akkad’s brilliant and frightening “American War,” and a re-read of Margaret Atwood’s “Handmaid’s Tale” is next up — but the firing of FBI Director James Comey has the feel of a slide into tyranny.
With the sudden dismissal of the nation’s top cop, President Donald Trump has upended democratic norms, signaled his contempt for the separation of powers and disgraced his office. No matter what lie Trump tells to try to cover his actions, he fired Comey because the FBI was deepening its inquiry into the Trump administration’s ties to Russia. Rather than cut the investigation short — as the president apparently wanted — Comey was determined to expand it, seeking additional funds to do so, according to published reports.
Trump demands complete and fawning loyalty; he seeks a claque of servile and spineless aides who flatter him with unquestioning support, no matter what he does or says. The president responded to Comey’s refusal to back away from the Russia inquiry as any narcissistic and imperious despot would: think Peter O’Toole’s Henry II in “Becket.”
But the real problem here isn’t the president. If the United States veers away from its democratic heritage, if the nation has been pushed down a path of authoritarianism and tyranny, Trump didn’t do it alone. History will show that he was assisted by powerful Republicans who allowed him to shove aside the Constitution and ignore the laws of the land.
Still, it’s not too late for us to reverse course. We can yet choose a path that respects our traditions, that adheres to our values, that insists that no man is above the law. Just a couple of generations back, a powerful man was forced to back down when he tried to dismiss those who were investigating his misdeeds.
When President Richard Nixon ordered Attorney General Elliott Richardson to fire Archibald Cox, the special prosecutor investigating Watergate, Richardson refused and resigned in protest. Nixon then turned to Deputy Attorney General Wiliam Ruckelhaus, but he, too, refused and resigned. By the time Nixon found someone to do his bidding — Solicitor General Robert Bork — the tide had turned against him. Congress was furious, as were many Americans.
So far, however, we’ve seen no such profiles in courage from the current line-up of powerful Republicans. Senate Majority Leader Mitch McConnell rushed to microphones to defend the president. Similarly, there was no great show of respect for the law from Attorney General Jeff Sessions, though he talks a lot about the U.S. Constitution. (Not that I expected much from Sessions. He is a demagogue interested only in defending white privilege and power, courting authoritarianism, if necessary, to achieve that end.)
More disappointing were the actions of Deputy Attorney General Rod Rosenstein, who took office last month with a reputation as an ethical straight-shooter, a former prosecutor with the courage to do the right thing. That reputation is now in tatters.
Rosenstein wrote the memo giving Trump an excuse to fire Comey, supposedly because Comey was unfair to Hillary Clinton during his investigation into her emails. (That doesn’t pass the laugh test since Trump was praising Comey for that investigation just a few weeks ago.) Rosenstein’s recommendation that Comey be sacked came just a few days after the FBI director went to him asking for more money for the Russian investigation.
Perhaps there are still some powerful Republicans willing to put country first, to sacrifice power for patriotism. It’s not too late for them to save the Constitution they claim to revere.